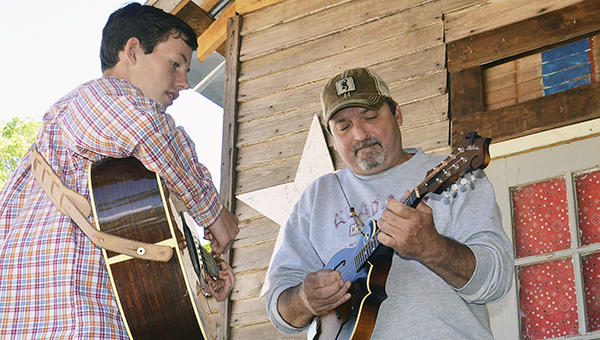 Justin Koch, a newcomer to the bluegrass festivals at Henderson, was learning licks by watching Mark Carter, a veteran picker at Ole Rex’s Pickin’ Park. Inset below, Richard Holmes plays the bass. The bluegrass festival gets in full swing at five o’clock tonight and will continue through Saturday night. Admission is free. Donations are appreciated.

Rex Locklar would have been grumbling to beat the bad on Thursday afternoon.

The wind was whipping, the air was cold and RVs were lined up waiting to park at Ole Rex’s Pickin’ Park at Henderson.

Pete Austin was taking Rex Locklar’s grumbling place and doing a rather good job of it.

“I’m lovin’ it just like Rex would,” said a smiling Austin, who was “challenged” with getting the RVs  – 104 of them – parked for tonight, opening night, of Ole Rex’s Bluegrass Festival.

The bluegrass festival is held bi-annually in memory of Rex Locklar who founded the festival nearly 50 years ago. When Locklar died in February 2014, his friends pledged not to let the bluegrass die, or Locklar’s legacy as their “king of bluegrass.”

“Bluegrass is music from the heart,” Austin said. “When you come out here, whether it’s to pick or sing or just sit back and listen, you become a part of the bluegrass family. Out here at Ole Rex’s Pickin’ Park, friends become family.

The Pickin’ Park was quickly filling Thursday afternoon with old timers and newcomers and each and every one of them is a member of the growing Henderson bluegrass family.

“We’ve got tents and we’ve got RVs that cost $625,000 and they’re all inhabited by folks that love bluegrass,” said Shelby Cargile.

All of the RVs will be parked and the tents pitched by pickin’ time tonight somewhere around 5 p.m. The pickin’ and grinnin’ and singin’ will continue almost nonstop until long after midnight Saturday.

“We do stop to eat a lot and sleep a little,” said Cargile, who along with Austin and Bobby Jackson, spearheaded the efforts to save the Henderson Music Park after Locklar’s death.

“Keeping this park going and Rex’s memory alive is possible because of all of Rex’s friends,” Austin said. “Everybody that knew Rex loved him and we all love bluegrass. We couldn’t let it go.”

Locklar’s brother, Wiley Locklar of Troy, graciously allowed Rex’s friends to do whatever was necessary to renovate and maintain the park. He, too, wanted the high, lonesome sound of bluegrass to be played in the park.

It has taken a sack full of ideas, a ton of backbreaking work, tens of talents and a fistful of dollars to renovate the Henderson Music Park.

The bi-annual bluegrass festivals are admission free but donations are greatly appreciated.

“Every dollar and every dime that is donated goes back into the park,” Cargile said. “We are heading into the black so we want to do some things for the community now. And, all of it is in memory and honor of Ole Rex.

“This bluegrass festival has been going on for 50 years and, if we keep following Ole Rex’s rules and regulations, it should go on for another 25 or 30 years or maybe more.”

Everyone who loves bluegrass music or thinks they might is invited to Henderson this weekend. And, those who hang around long enough will become a part of a very special family – Ole Rex Locklar’s bluegrass family.