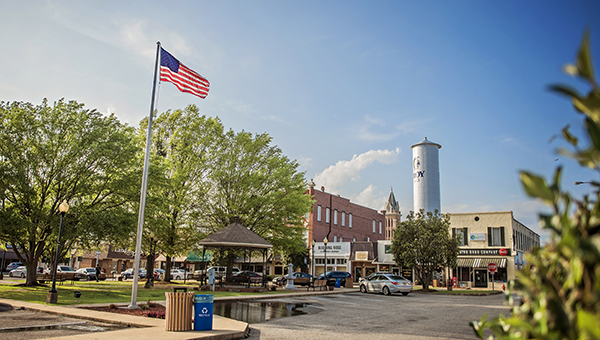 Despite heavy potential for strong storms Wednesday, Pike County emerged mostly unscathed with the most dangerous wave of storms never materializing. Above, storm clouds loom over a Troy water tower.

For a while Wednesday, it looked like local cities should roll up the streets and call it a day. Gov. Robert Bentley had declared a state of emergency due to the threat of severe weather statewide and some storeowners decided to err on the side of caution and posted “closed” notices on their doors, as did Brundidge City Hall.

But the county made it through the weather event mostly unscathed, partially due to the most dangerous round of storms developing much farther north than originally predicted.

Pike County EMA Director Jeanna Barnes said the first round of storms moved through around 2:30 a.m. and swept mostly through southern Pike County.

A second round of storms moved in around 8:30 a.m. and put the county back under a sever thunderstorm threat and Barnes said the second wave is still ongoing at this time.

A third wave, which meteorologists predicted could be the most dangerous, never materialized in the area and instead affected North Alabama and northern neighbors Tennessee and Kentucky.

While the storms didn’t live up to their potential severity, that didn’t keep the storms from affecting the area by closing schools, offices and business around the county.

Both Troy City Schools and Pike County Schools, all private schools, Troy University, daycares and government offices shut down for the day in addition to businesses that decided not to open their doors for the day.

First National Bank joined several businesses in their decisions to be open for business.

“We monitored the situation very closely and decided that being open would not put our employees in peril,” said FNB President John Ramage. “But I certainly understand the decisions to close the schools. I get it …

“The Pike County Schools have bus routes to run and Pike Liberal Arts has students from nine counties. That makes the decision rather easy. And, parents have to make arrangements for their children when schools are closed, so decisions have to be made with that in mind. It would be much better to overreact than to end up with egg on your face.”

Ramage said earlier in the day business at the bank was slow but, when the rain stopped and sun begin to come out, business picked up especially at the drive through.

Dixie Shehane, senior vice president of Troy Bank & Trust in Brundidge, said the bank was open all day and ready to serve its customers.

“We were open for our customers who needed the service of our bank,” Shehane said. “We had customers in throughout the day.”

Main Street in the downtown area was quiet early but people began to stir around lunchtime.

“For us, it was a good day,” said Parita Patel, owner of Pizza Palace. “Children were out of school so we had more to-go orders than on a usual Wednesday. We had a good day on Monday, too. We appreciated the business and were glad the weather was not bad like it could have been.”

The downtown square in Troy was much of the same. Among the many businesses that remained open was Milky Moo’s which had around 20 people enjoying ice cream at the restaurant Wednesday afternoon.

Josh Nelson with Milky Moo’s said business at the store had been dead during the morning storms, but people began to trickle in more and more as the clouds gave way to sun early in the afternoon.

Ashley Floyd and his daughter Reese were among the patrons taking the break in weather to get some ice cream.

Floyd said they’d been cooped up in the house all morning and were taking the chance to get out before more projected storms could move in.

While local residents were out enjoying the break in the weather, Barnes was back at the EMA office working diligently to make sure people were informed that the sunshine didn’t necessarily mean the threat was over.

“Even though the sun is out, that doesn’t mean we’re out of the woods,” Barnes said. “The sun coming out could actually be a bad thing because daytime heating can actually to the instability of the atmosphere.”

Complicating matters for Barnes and her team was the fact that two of the state’s main radar systems had already gone down and lost its third radar system early Wednesday afternoon.

“We’re having to look at Eglin to see what we can,” Barnes said. “The problem is everything has been developing over us so we can’t really say for sure what might be moving toward us.”

The rains never came though and Pike County residents got a peaceful ending to a day of uncertainty.

Damage reports so far have been minimal, Barnes said.