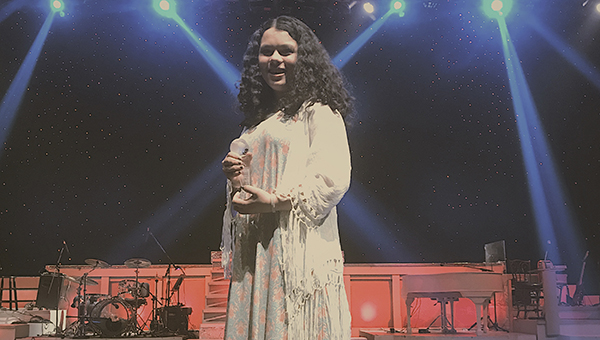 Cathie Stockstill recently won a talent competition at the Country Tonite Theater in Pigeon Forge, Tenn. The Pike Liberal Arts Student is a popular local performer in Brundidge and hopes to pursue a career as a doctor one day.

Cathie Stockstill stood on the biggest stage of her young life.

She had never dreamed that she would be in the spotlight at the popular Country Tonite Theater in Pigeon Forge, Tennessee. But there she stood and there came the butterflies.

“I was nervous,” Cathie said with a smile. “I’d been on stage a lot of times but that was different. That was a big stage and I was competing. I was nervous.”

Cathie was competing with 20 other contestants in her age group, seventh through 12th grade, at the North America Country Music Associations Int’l Competition Week. For Cathie playing at The Old Barn in Goshen or Santa Fe in Troy was as comfortable as wearing an old shoe, but competing in the NACMAI was butterfly time.

Cathie competed twice on the stage of the Country Tonite Theater. The second time was the charm.

“After I competed the first time, we had a break,” she said. “We went and ate supper and, when I got back to the theater, all the nervousness went away. I guess, doing something for the first time is the hardest.”

For her second on-stage performance, Cathie sang two of her favorite country songs, “Don’t It Make My Brown Eyes Blue” and “Back in My Baby’s Arms Again.”

When the curtain came down on the NACMAI Competition Week 2017, Cathie Stockstill, a seventh-grader at Pike Liberal Arts School, was named Future Star of Tomorrow in the vocalist category.

“I was proud and honored and just real happy,” Cathie said. “I had fun. Singing is always fun to me.”

Cathie has been singing since she was a little girl. She can remember singing with a banana as a microphone.

She has been singing at Tennille United Methodist Church where she is a member for several years. Her guitar teacher, Lenny Trawick, is also a member and often accompanies her.

Cathie also sings at Collier’s on Main in Brundidge and at events on the square in downtown Troy.

When she was a third-grader, she began performing in Alabama’s Official Folklife Play, “Come Home, It’s Suppertime” at the We Piddle Around Theater in Brundidge.

“I’ve been in 10 seasons of ‘Come Home.’ I love being in the play,” she said. “I love the stories and the singing. I have a lot of friends in the play and everybody there is like family.”

Cathie takes voice lessons from Megan King Johnson, who was also a member of the “Come Home” cast. She takes piano from Gwen Threadgill. She plays trombone in the band at PLAS.

With Cathie’s interest in music and her ability to make music and sing, it would seem that her future plans include a career in the music industry or in theater. But no.