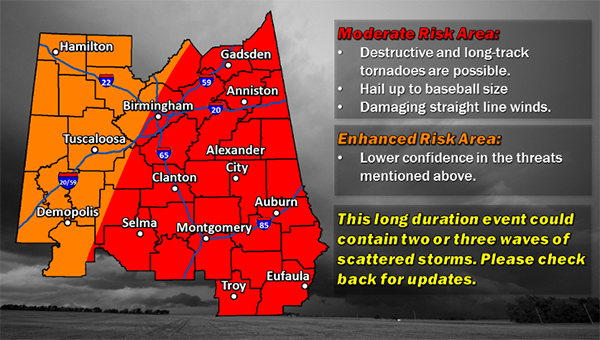 More severe weather is predicted today for Pike County and EMA director Jeanna Barnes said this system has the potential to cause even more damage than Monday’s storms.

Unlike Monday’s storms, Barnes said these storms will be super cells that develop over Alabama.

“These storms will be developing over Alabama, so we can’t look back at Mississippi and all to see what’s happening,” Barnes said.

Monday’s storms came across the Southeast in a squall line from the west, resulting in just one round of severe weather for Pike County.

This storm system will have the potential to create several rounds of storms though, Barnes said.

“We’re looking at storms coming in the early morning with the stronger storms expected tomorrow afternoon,” Barnes said. “But any of these storms could be severe.”

As of Tuesday at 5 p.m., Barnes said the expected timeframe for severe weather ranged generally from about 3 a.m. Wednesday morning to 7 p.m. Wednesday night.

Barnes said the storms carry the threat of spawning stronger long-track tornadoes, baseball-sized hail and winds of over 70 mph.

Another risk Barnes said is that Monday’s storms saturated the ground, elevating the risk of trees being uprooted. Barnes said “dusty winds” could also be expected with winds reaching up to 25 mph even when it isn’t raining.

The Troy Recreation Center, Salem Baptist Church and Brundidge United Methodist Church will open their doors for those seeking shelter if the county goes under tornado watch. Trojan Center and Sartain Hall on the Troy University campus are also open today for students seeking refuge from the storm.

Governor Robert Bentley declared a state of emergency Tuesday to have agencies prepared to move immediately if the state has major damage.

Barnes is encouraging residents to not only listen for sirens, but have access to a weather radio and other ways to get weather alerts such as weather apps. Updates will also be available through local media and through the Pike County EMA Facebook page.