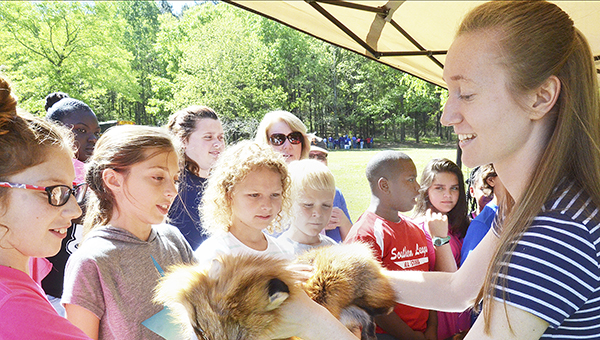 More than 125 fifth-grade students from Goshen, Pike County and Pike Liberal Arts schools attended class in the forest Tuesday at the Renfroe Family Farm in the hinterlands of Pike County.

Heath Wesley, Pike County Extension coordinator, said Classroom in the Forest 2017 was, once again, successful in providing an opportunity for fifth-grade students to spend a morning of fun and learning in an outdoor classroom.

Wesley said the students were divided into five groups and the groups rotated to the different classrooms.

“The students learned about pond management, wildlife, prescribed burning and tree identification,” Wesley said. “They also visited the Soil Tunnel Trailer and learned about the different soils in our region and the animals that make their homes in the soil.”

Alabama foresters Jeremy Lowery and Johnny Knighten talked with the students about the difference between prescribed burning and wildfires and the different ways in which they are fought.

“It’s hot out here today but think about how hot you would be if you had to put on all the gear that a firefighter has to wear when attempting to put out a fire,” Lowery said. “Firefighters have to wear a helmet and heavy turnout gear. And, sometimes, they have to wear it for 24 hours without taking it off and without sleeping.”

A.J. Brown, a Goshen Elementary student, volunteered to put on several items of turnout gear – a helmet, jacket, radio and gloves. He was instructed to shovel the grass down to the ground.

“This is hard work and it’s hot,” A.J. said after a few attempts to “hit ground” failed.

The Skins and Skulls station provided the students with an opportunity to learn about the furry creatures that inhabit South Alabama’s forests. Esther Gilbert, the county’s 4-H agent assistant, identified the dried skins of a fox, a bobcat and a coyote and the students had the opportunity stroke the animals’ fur.

Bence Carter, Alabama Extension agent, conducted the class on pond management and included information on how to balance a pond.

“Bass reproduce one time a year,” he said. “Bream reproduce four times a year. Do the math and you will understand how quickly a pond can get our of balance.”

He discussed the different methods that can be use to get pond back in balance from fishing to shocking the pond.

The Deborah Huggins Davis team gave tours of the Soil Tunnel Trailer. Students could actually go “underground Alabama” and experience what life is like for animals that live under the ground.

Dr. Stephanie Tucker, Pike County Elementary School, said the fifth-grade students have been studying the ecosystem and were prepared to receive the information offered to them at Classroom in the Forest.

“This farm is a beautiful place and it’s an opportunity for the students to see what can be achieved when you are good stewards of the land,” Tucker said.

Carol Dorrill, Pike County Treasure Forest Association president, agreed the Renfroe Farm is an ideal setting for Classroom in the Forest. She also said what the students experienced though the hand-on learning opportunities will re-enforce what they have learned in the classroom and be building blocks for future learning.