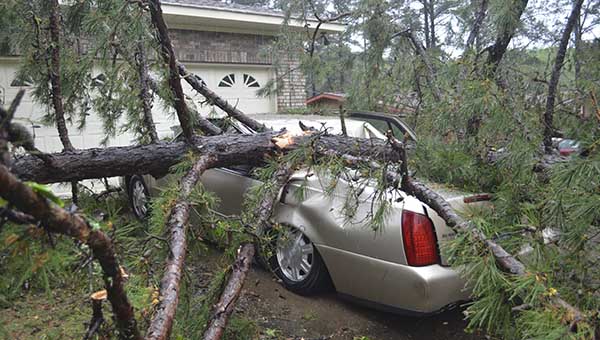 Storms with strong winds ripped through parts of Troy Monday, particularly affecting the Lakewood Drive area off U.S. Highway 29 between troy and Luverne. Trees and power lines were downed all throughout the subdivision Monday, but nobody has reported any injuries or casualties. Pictured above is a car that was crushed by one of the trees that fell in the Lakewood Drive subdivision.

Lisa Nonnenman was walking back to her home in the Lakewood Drive subdivision when strong winds suddenly ripped through the neighborhood Monday morning.

Nonnenman said there was no warning that the wind was about to hit, not even any rain. “It was really scary,” Nonnenman said. “I’ve never seen anything like it.”

Jeanna Barnes, director of the Pike County EMA, said the National Weather Service determined that the event was not a tornado but strong straight-line winds that moved through the area as part of deadly storm system moving across the state.

Still, Nonnenman said the winds felt like a tornado. The wind ripped off a tree limb that landed just 10 feet from where Nonennman stood in the road.

“I heard that tornado sound,” She said. “I ran in my house and I couldn’t shut the door the suction was so strong.”

Meanwhile, her mother-in-law and brother-in-law took shelter in their basement across the street.

Her mother-in-law’s car didn’t survive the winds, as a tall pine tree toppled over and smashed in the roof of the car.

The next house over, the home of Bobby and Linda Leverett, had two large trees uprooted in the front yard and more trees in the back– one of which hit the kitchen.

“My husband told me to move and I got out of the way,” Linda said. “If I had been standing there, that tree could have hit me.”

A bit further down the street power lines had been toppled by yet another tree, the wires precariously lying out in the roadway. Fallen trees could be seen all up and down the neighborhood.

Barnes said the neighborhood was probably received the worst of the damage but that the storm had taken down trees across the county.

“Of course, we’ve got trees kind of all over the county down,” Barnes said. “Some were snapped, others were completely uprooted … Winds of 60-70 mph can do some damage, even if they’re not a tornado.”

Troy City and Pike County schools systems were among the schools in that state that closed down due to the severe weather. The local school systems originally planned to open until noon, but decided Sunday night to close for the day, along with several other private schools in the area. Troy University stuck with its plan to cancel classes from noon to 5 p.m.

Barnes said the power outages caused by the storm were mostly related to nearby trees falling on power lines and that most of the county didn’t experience outages that she knew of.

Brian Chandler, manager of Troy Utilities, said about 50 people were still without power at 4 p.m. Monday but utility workers were hard at work to get power back to those residents.

“We have a few individual outages remaining and then the two areas with the most damage were George Wallace Drive and Botts Avenue,” Chandler said. “We have about 50 people without power and most are involved with those two areas and a handful of people in other areas. In the Lakewood area it tore down wires and broke our equipment, so there’s pretty extensive damage done there. We’re doing our best to get everybody on in the next couple of hours.”

South Alabama Electric Cooperative (SAEC) reported that 2,500 were affected at the peak of the storms Monday, but only 379 homes remained without power by 4:30 p.m.

According to officials, the SAEC’s substation in Luverne was lost initially but is now back on. Officials also reported numerous broken and damaged poles along Highway 29 between Troy and Luverne.

Luverne was one of the areas of South Alabama that did get hit by a tornado, according to officials within the Crenshaw County EMA. Although the tornado has not been confirmed by the National Weather Service, Crenshaw EMA assistant director Cheree Kelley said that she and Crenshaw EMA director Elliot Jones spotted a tornado in the city.

One mobile home was completely destroyed, Kelley said, but the four people inside were uninjured. A total of about 50 business and 30 residences were damaged during the tornado, Kelley said, whether slightly or significantly.

The damage was a result of a major storm system that swept across the Southeastern U.S. Monday, killing five people in Louisiana, Mississippi and South Carolina.

No casualties have yet been reported in Pike County, Luverne or elsewhere in Alabama.

Severe weather is expected again Wednesday, Barnes said, with a general timeframe of 3 a.m. to 3 p.m. currently being given for the extreme weather. The timeframe will get more specific for Pike County tomorrow, Barnes said.

“We’ll have briefings at least twice tomorrow with the weather service so we’ll have a better idea of threats coming in tomorrow,” Barnes said. As of right now, wind hail and tornadoes are all on the table for Wednesday.”

Residents can get updates from the Pike County EMA by following their Facebook page.