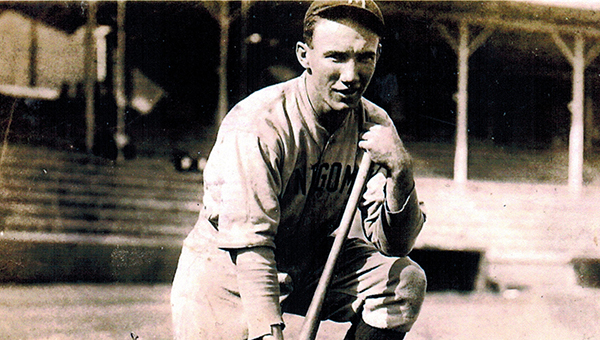 Thomas Roy “Goat” Walker of Troy is prominently featured in a new book, “Baseball in Montgomery.” The multi-facted athlete played all nine positions on the field (represented by the various gloves above). Walker played for the Troy State Normal School team that was undefeated in 1923. Walker is third from the left on the front row of the photo inset below.

A famous Troy baseball player from the early 20th Century is highlighted in a new book.

Thomas Roy “Goat” Walker of Troy was a noted baseball player from the 1920s and 1940s. He played on the undefeated Troy State Normal School baseball team and went on to play professionally.

He went directly from Troy State Normal School to the Birmingham Barons, which was one step below the major leagues at the time.

“‘Goat’ Walker went on to win more that 250 games as a professional pitcher, mostly at class B which was two steps below the major leagues at the time,” said Tommy Horn, Walker’s great-nephew. “He was a good all-around baseball player. In at least one game and, probably more, Goat Walker played all nine positions. That would be unheard of in this day and time. And, he won 20 games twice after he was 40 years old.”

“Thomas ‘Goat’ Walker is featured on the cover of a recently published book by Clarence Skip Watkins  and Arcadia Publishing that chronicles the history of Montgomery professional baseball, titled “Baseball in Montgomery.”

“There’s a whole chapter on ‘Goat’ Walker in the book,” said Horn. “It even shows a picture of him in one of his classes at Troy High School.”

Walker’s family lived first in the Goshen community and then moved to Troy.

“I’m not sure if he went to elementary school in Troy but I know he went to grades nine through 12 at Troy High School,” said Horn, who is a Troy resident.

“He got the nickname, ‘Goat’ from one of his teachers at the high school because he was an expert at making spit balls in class. An ol’ goat will eat anything and he was chewing on paper.”

Goat Walker was a friend with Johnny Mack Brown who played for the University of Alabama in the first Rose Bowl in 1926. Johnny Mack Brown went on to become a “cowboy” star on the silver screen. Brown had family in Banks and visited there often. That’s how he and Walker became close friends.

But Walker was not just an outstanding collegiate baseball player, he excelled in other sports as well. However, baseball and boxing were his favorite sports.

“Goat” Walker was the first of three generations to play for the college in Troy.  His nephew John C. Horn played for Troy State College in 1950 and then played catcher for Dothan and Graceville in the old professional class D Alabama Florida league.  John Horn’s nephew, Tommy Horn, played for Troy State University in 1970 and 1971.

Horn said, in all likelihood, his love of baseball and his ability to play the game came from his great-uncle Goat Walker.

“He was a great baseball player and one of the best to play the game in Montgomery,” Horn said. “And, for sure, he was one of the most popular players to ever play there.”

Although Montgomery had been in the professional baseball business since 1892, the city had not had the honor and excitement of winning a championship. But in 1928, the Montgomery Lions team was laced with Southern boys and Goat Walker was a team favorite. The Lions brought a baseball championship to the Capital City.

The Lions beat the Ashville Tourists in a best of seven series. Montgomery won the series in six games. Walker was responsible for two of the wins against Pensacola for the championship.

The Montgomery Lions won a second championship in 1929.

Walker left the Montgomery Lions after the 1930 season and the fans honored him with Roy Walker Night.

His four best years as a pitcher were at Jacksonville, Florida where he won 74 games in that time span. Walker returned to Montgomery for three years. When he left Montgomery in 1942, he was honored again with fans’ appreciation night.

Goat Walker had a humble disposition. He played many positions and had a hot bat as well. He became a favorite wherever he played, Horn said. At the close of his career, Goat Walker played two years with Selma but was hobbled by injuries. In 1950, Walker took the mound for the last time in his professional baseball career. He made a start for the Cloverleafs but was hit in the leg with a screaming line drive.  The fans heard the crack of the bat and the crack of Walker’s bone. He was carried off the field. His career had ended. He was 47 years old.