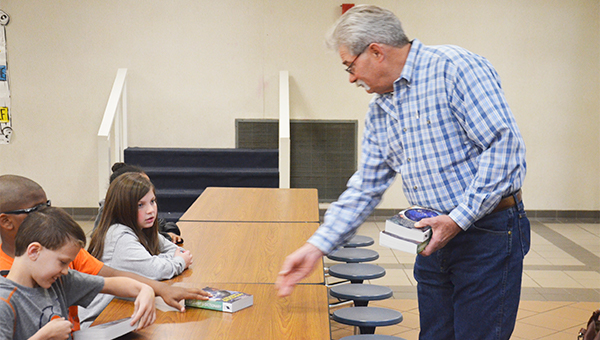 The Troy Rotary Club donated dictionaries to every third grade student at Troy Elementary School Friday as part of a project to help give kids the tools they need for education.

In addition to the gift, Kathy Sauer, project leader, and Scott Hartley, president of the Troy Rotary Club, talked to the students about the club and how to use the dictionary properly.

Sauer talked the students through the “four-way test for life” that the rotary club uses to determine what the right thing to do is.

“The first thing to ask yourself is ‘Is it the truth?’” Sauer told the students. “Next you have to ask ‘Is it fair to all concerned?’ It’s OK to be competitive, but it should be done fairly.”

The other two steps are to determine whether the action will build good will or friendships and whether it is beneficial to all concerned.

It’s OK to take an action sometimes that ends a friendship, Sauer explained, but that should be taken into account before the decision is made.

Sauer and Hartley then asked the students to find some specific things such as the U.S. Constitution, the longest word in the English language and even how to contact the President.

Some other things that the students searched for were which foreign country they’d like to travel to, how to find a sign language guide.

The third grade students were chosen out of their classes to go back and give the same reports to their classmates as they passed out dictionary copies to the other students.