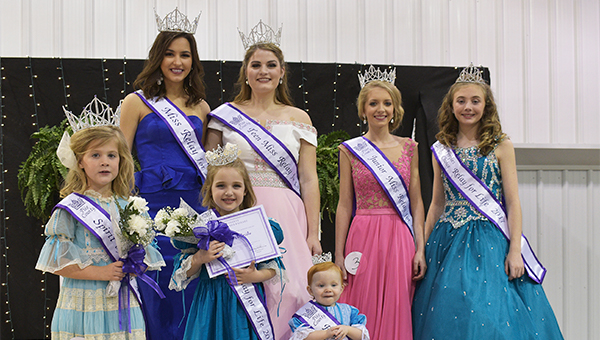 Nearly 50 girls of all ages competed Saturday in the Soushide Baptist Church Relay for Life pageant, raising over $10,000 for the cause.
Above, the winners of each category pose for a group photo.

The idea of a pageant as a fundraiser for Southside Baptist Church’s 2017 Relay for Life team had immediate appeal for Karri Booth and Judy Robertson.

Both have girls who are in pageants so they were familiar with the community of people with similar interests. They thought a pageant would be successful in raising dollars for such a worthy cause as Relay for Life.

The Southside Baptist Church Relay for Life Pageant was held Saturday night with 49 entries with an astounding $10,500 raised.

Southside Baptist Church has had other Relay teams but never before has such a huge amount of money been raised.

“Both Kari and I have had family members affected by cancer as have so many other people,” Robertson said. “When you couple an interest in pageants with a great cause, then you have a good chance to be successful.”

The co-chairs said the contestants were encouraged to raise money for Relay above the entry fee and the challenge was accepted and met.

“All of the girls were involved in the raising money for Relay and our church members contributed in many ways. Everyone of them contributed to the success of the pageant,” Roberson said.

The pageant contestant who raised the most money for Relay was awarded the Spirit of Relay award. Six-year-old Mary Clark Brown ran away with the prize. She raised $4,015 for the cause.

Both of Mary Clark’s great-grandparents lost their lives to cancer so her parents, Jennifer and Matt Brown, thought it would be a caring thing for her to do.

“And Debbie and Ken Kelly are our children’s adopted grandparents. Ken’s mom is a breast cancer survivor,” Jennifer Brown said. “Raising money was something we could do in memory and honor of them.”

The Browns had $5 tax-deductible Relay tickets printed and Mary Clark visited businesses asking for donations and knocked on doors in the neighborhood.

“When Mary Clark got $500 in 30 minutes, we knew we were on to something,” Brown said. “We wanted Mary Clark to understand what she was doing and why. We explained to her that cancer makes people very sick and the money that we raised helps them to get better.”

Mary Clark didn’t know there was a prize for raising the most money so she was surprised and excited when she was awarded the crown.

“I wanted to do something for the people who have a disease,” Mary Clark said. “I had a good time asking for money for those people. I would like to do it again because it helps people.”

Mary Clark said winning a crown was fun but the most fun was going to houses with her Relay cards.

The winners in the Relay for Life Pageant were: