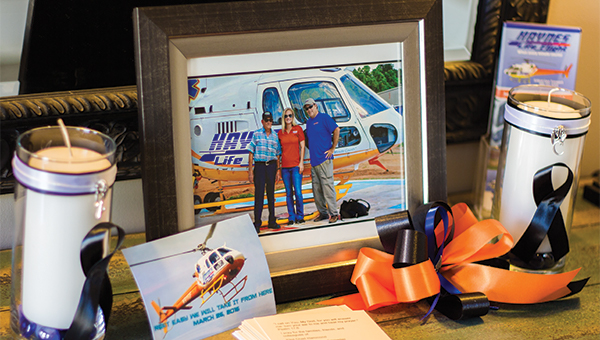 Haynes Ambulance held an “honor service” Sunday to commemorate the one-year anniversary of a fatal crash that killed three Lifeflight crew members and one patient. Pilot Chad Hammond, flight nurse Stacey Cernadas and flight medic Jason Snipes are are honored in the tribute above at the Haynes office a year ago.

Just over a year ago, four people lost their lives when a Lifeflight helicopter based at Troy Regional Medical Center crashed while attempting to transport a patient.

Sunday, exactly one year later, Haynes Ambulance held an “honor service” for the crew at the TRMC helipad.

Wes Kelley, chief flight nurse, told the roughly 60 people in attendance that the service was meant to honor the crew, as nobody at Haynes has any trouble remembering them or what happened that day.

“When we were planning this service, I wondered how do you remember something you already can’t forget?” Kelley said. “So this service isn’t really a memorial, we remember them every day. This is a service to honor them.”

Kelley recounted each member of the crew– flight nurse Stacey Cernadas, pilot Chad Hammond and flight medic Jason Snipes– and reminded those in attendance about the unique characteristics each brought to the team.

“Jason was kindness. He was just a very kind person¬ that was the way he was. I was in his hometown the other day and everyone still talked about Jason.”

“Stacey was easy– she’s determination. Her goal was to be a flight medic and a flight nurse and she had a take-charge attitude that you couldn’t help but notice.”

“Chad was excellence. He strived to be the best in what he was. He had a few certifications that most pilots apparently don’t get. He was a good pilot that everyone loved working with.”

Kelley said these are three characteristics that his team needs every day as they continue to do their jobs and put their own lives at risk.

“After the accident, I thought about what each of these three individuals would want us to do if the roles were reversed,” Kelley said. “It immediately became clear: they’d want us to keep doing what we do. These people cared about helping people and saving lives.

Kelley said the Haynes team is grateful for the outpouring of support they’ve gotten since the crash happened.

“The support has been humbling,” Kelley said. “We can’t express our gratitude.”

At the end of the ceremony, officials unveiled a memorial stone in honor of their lost comrades bearing their names. The statue sits just outside the helipad gate and Kelley said it will be there as long as the stone lasts.

Zach Strickland, the patient onboard the flight, also lost his life that day. He had been in a motor vehicle accident in Coffee County.

The helicopter was dispatched to the accident and was en route to Montgomery when the crash occurred.