Suspect charged with shooting into vehicle 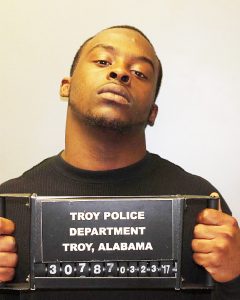 Police arrested a Troy man Thursday on charges of discharging a firearm into an occupied vehicle.

Troy Police Chief Randall Barr said his department arrested Kristopher McKinney, 19, Thursday for allegedly shooting into a vehicle as it drove away from a convenience store in the 700 block of North Three Notch Street Wednesday. The incident took place around 8 p.m.

“Reports indicate that a white Dodge Charger occupied by two adult males entered the parking lot of a convenient store and there was brief physical contact and a verbal exchange between McKinney and the passenger of the Charger,” Barr said. “As the Charger left the parking lot, McKinney allegedly fired several rounds into the vehicle.”

Barr said the driver of the Charger received a minor cut on his arm, but denied medical treatment.

McKinney was placed into the Pike County Jail on a bond of $5,000.