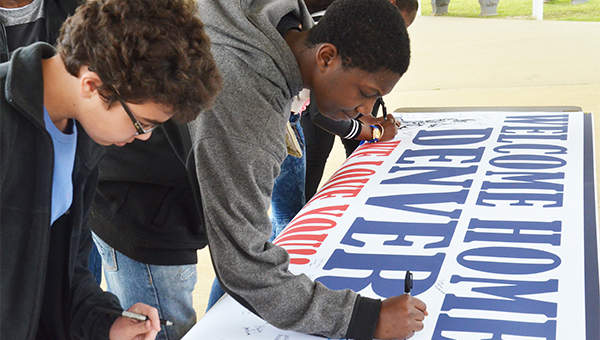 Denver Buck’s schoolmates at Goshen High School sign a banner that Buck’s grandmother, Faye Juneau, put up to welcome him home Friday. Buck was critically injured in a crash in January and spent nine weeks in the hospital. Buck was in a coma for weeks but awoke in late February and began rehab at Children’s Hospital in Birmingham, where he regained the ability to speak and gained more freedom of movement.

Buck, 16, was critically injured in January when his truck was hit on the driver’s side door by a car travelling down U.S. Highway 231. Buck was airlifted to Baptist South Hospital in Montgomery and spent much of those first few weeks in a coma.

Buck said he’s just glad to be getting back.

“I am very happy to be going home,” Buck said. “Very happy.”

Buck went through a long road of recovery just to get to this point, and he still has a long way to go, but his family is just happy he’s recovered so well.

“We still have a long way to go, but, oh boy, we are excited,” said Orlando Buck, Denver’s father. “We’re so excited he’s coming home… We look back to where we were on January 21 and stand amazed at how far God has brought Denver: from a near fatal accident to a young man today who is able to eat and drink and walk and talk.”

Denver awoke from his coma in February and was transported to Children’s Hospital in Birmingham for therapy. Since then, he’s been progressing from simple words and gestures to fuller speech and movement.

Ever since he regained his speech, he’s been asking to come home.

Friday, that hope finally became a reality as Denver made his way back to Troy to a warm welcome.

Denver’s schoolmates also made posters Thursday for Juneau to place along the final stretch of Denver’s road home to welcome him.

Orlando said the family is very grateful for the prayers and support that they have given Denver and the family during the trying time.

“We cannot say thank you enough to everyone for all their thoughts and prayers,” Orlando said.

“You have been a true blessing to us.”

Juneau wanted to thank Horn Beverage for donating the banner, Goshen High School for making the posters and Maxine’s Flowers and Gifts and Jean’s Flowers for donating ribbons for the banners.