‘A JOB WELL DONE:’ On her retirement, Laliberte honored as a true ‘Trojan Warrior’ 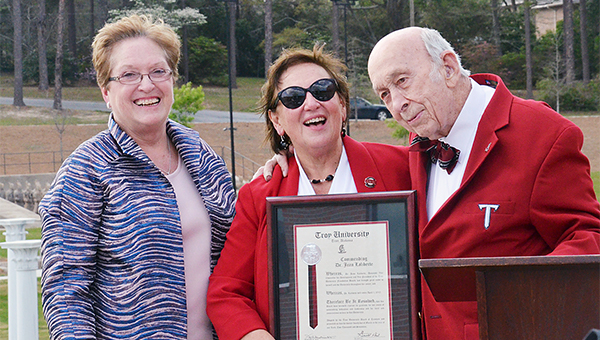 Messenger photo/Jaine Treadwell
Karen Carter and Roy Drinkard, members of the Tory University Board of Trustees, praised Dr. Jean Laliberte for leaving a deep legacy at the university. They were among the many members of the Trojan Nation who spoke during a public retirement reception for Laliberte on Friday.

Passion, determination and loyalty were the themes used to describe Dr. Jean Laliberte at her retirement reception Friday at the Daniel Plaza on the campus of Troy University.

“I knew immediately that Jean Laliberte was special,” Hawkins said. “And the more years that passed, the more I realized how special. Today, we are here to say, ‘a job well done, Jean.’”

The chancellor used JEAN as an acronym to describe the characteristics that Laliberte, Troy University vice chancellor for development, possess that make her outstanding leader with a servant’s heart.

“‘J’ is for a job well done and for the joy she brings to all she does,” Hawkins said. “‘E’ is for Jean’s enthusiasm. Ralph Waldo Emerson said nothing great is ever achieved without enthusiasm and Jean has achieved great things. ‘A’ is for attitude and for accomplishment. ‘N’ is for no one who is more caring. We congratulate Jean on a job well done.”

Karen Carter and Roy Drinkard, members of the Troy University Board of Trustees and the Foundation Board, said they are two of Laliberte’s biggest fans.

“Jean is a friend and a loving, caring person,” Carter said. “Like Roy said, we might never let her go. Her legacy will be retained and her friendship will continue.”

Carter and Drinkard presented Laliberte a proclamation from the Troy University Board of Trustees expressing the board’s gratitude for her loyal and conscientious service.

Mac McLendon spoke directly to Laliberte and then to those who gathered to honor her.

McLendon’s family established a scholarship in memory of his son Lance Robert McLendon in 2006.  He acknowledged Laliberte’s support, her direction, her ideas and feedback in the decisions that had to be made when setting up the scholarship.

“There are those who make others better and Jean Laliberte is one of those people,” he said. “She is one of Troy University’s greatest blessings. Thank you, Jean.”

Jeni Gruber said she never thought she would see the day when her mom would retire.

“I could not be more proud of my mom,” she said adding that her mother has a servant’s heart and a heart for Troy University and for the Troy community. Gruber and her family live in Lincoln, Nebraska and she said they are looking forward to spending more time with Laliberte now.

General Walter Givhan, senior vice chancellor for advancement and economic development at Troy University, recognized Laliberte, who is a wife, mother, grandmother, daughter, sister and loyal friend to many, as a true Trojan Warrior.

In introducing Laliberte, he presented her with a Trojan Warrior print with her image as the warrior.

“Jean has a passion for Troy and the determination of a warrior,” Givhan said. “She is a Trojan Warrior.”

Laliberte expressed appreciation for all the kind words and kindness that have been shown to her pending her retirement officially on March 31, 2017.

“This is not easy,” she said. “I’ll still volunteer and I’ll be a Trojan until I die.”  The Trojan Nation stood and applauded.