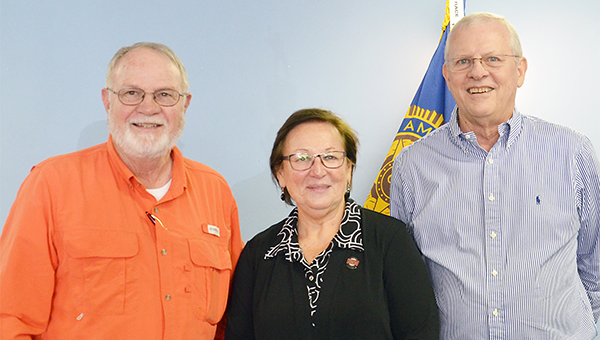 Dr. Jean Laliberte, Troy University vice chancellor for development, was the guest speaker at the Thursday meeting of the Troy Exchange Club. Terry Hassett, left, was the program host. Jerry Beckett is the club president. Laliberte will be honored with a retirement reception form 2 until 4 p.m. today at the Daniel Plaza on the Troy University campus.

However, Laliberte who will be honored with a retirement reception today at Troy University, said emphatically that she is not leaving Troy.

“I’ll be a Trojan the rest of my life,” said Lalibert, Troy University vice chancellor for development, in leaving the door wide open to volunteer opportunities at the university and in the community.

Hassett said Laliberte had been a strong influence at Troy University since she arrived in 1991 and has seen many changes over the years.

And, it was those changes that Laliberte shared with the members of the Troy Exchange Club Thursday.

She highlighted three areas of importance to her during her tenure at Troy University – athletics, academics and fundraising – but not necessarily in that order.

“Nineteen-ninety one was not that long ago but many amazing things have happened at Troy University,” Laliberte said.

She remembered when in 1992, the Troy University men’s basketball team set an NCAA scoring record by topping DeVry Institute 258-141. In 2001, Troy University moved to Division I, which was “the best thing that ever happened,” Laliberte said.

She highlighted the completion of the women’s softball complex in 2003 and nationally the nationally televised beating of Missouri on the gridiron.

“We won the Sunbelt Championship in football in 2005,” Laliberte said. “In 2010, the Trojan Arena was dedicated and we beat Navy in football. That was a big year.”

In 2016, the university hosted DeMarcus Ware Day and, perhaps, not by coincidence, Ware and Laliberte are retiring in the same year, she said with a smile.

In 2017, the men’s and women’s basketball teams won Sun Belt Championship and that was huge, Laliberte said.

Academically, Laliberte recalled the university’s first capital campaign in 1996 with $21 million raised. In 1998, the university changed from the quarter system to the semester system.

“In 2001, Troy hosted the first African American Leadership Conference and the conference has continued to grow every year,” Laliberte said. “In 2004, Troy State University dropped ‘State.’ Unless a university is a flagship ‘state’ university, it is assumed that it gets state dollars and that impacts donations.”

After dropping “State,” donations to Troy University have greatly increased.

Laliberte mentioned the university’s doctoral nursing program in 2006, the Confucius Institute in 2007, its designation as an All-Steinway school in 2014 and Troy University students participating in the archaeological dig that unearthed a Philistine Cemetery in Israel.

Laliberte said new construction has given the university a new look and a greater purpose.

The Rosa Parks Museum in Montgomery was completed and dedicated in 2001.

“I attended the dedication and was able to watch the people as their lives were chronicled.

The biggest change on campus was in 2004 with the Quad restoration,” Laliberte said.

The new education building and the new student dining hall were additions of note as was the Confucius Institute.

“The Janice Hawkins Park blows you away with its two art galleries and interpretive center,” Laliberte said. “Troy University is the only permanent site of terracotta warriors outside Xi’an, China.”

Laliberte said the Troy community can look forward to future growth. She is excited about the end zone facility at the north end of Memorial Stadium; potential enrollment increases to 10,000 on the Troy campus and a continuing excellent town and gown relationship.

Laliberte had good news all around but the best news for the Exchange Club members was that she may venture for a while but she’ll always come back home to Troy, Alabama.