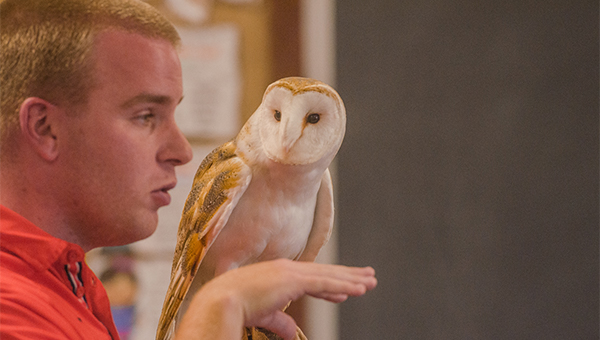 First grade students at Troy Elementary School got an up close look at owls, falcons, hawks and even a bald eagle Thursday when members of Southeastern Raptor Center visited the school.

Not only did the students get to see some amazing animals at close range, the students also got to learn a lot about them.

For instance, the students learned that falcons are the fastest animal on the planet, reaching speeds of up to 220 miles per hour when they’re diving downward to prey on smaller birds.

They learned that great horned owls are one of the few known predators of skunks due to their lack of smell.

They learned that bald eagles were once endangered due to a chemical pollutant that thinned their eggshells and that vultures disinfect their wings by spreading them out in the sunlight.

And for each lesson taught by the representatives from raptor center, there was a bird alongside them to demonstrate some of these unique facts.

The students voiced their amazement when the larger birds were brought out for display, they laughed when the trainers placed a hood on a falcon’s head and it immediately went silent.

The classes didn’t just listen either. When the classes broke up to get an individual session for the birds, plenty of students had questions, including how to tell girl owls from boy owls and whether owls have ear holes.

TES principal Teresa Sims said the kids love having the chance to see the birds.

“We’re always excited to have the Auburn University Raptors program visit our school,” Sims said. “The kids love it. Many would never get an opportunity to se these animals. It’s very educational; they bring a lot of information and the kids get to see the animals up close in the classroom. We love this program.”

The visit is made possible each year by a grant from the Troy Education Foundation.