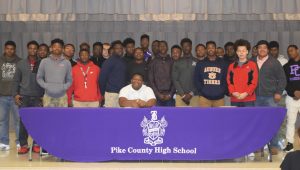 Thomas will report to fall camp in August.

Although several other colleges had expressed an interest in Thomas, he chose Eastern Arizona because he has an opportunity to work his way into the starting lineup as a freshman.

“And, too, I’d like to get away for a while,” Thomas said with a smile. “But, The coaches said if I work hard over the summer and come to camp prepared, I could start at defensive tackle. They like my speed and quickness and that I’m a hard worker.”

Thomas has been playing football since the eighth grade. He started for the Bulldogs in the ninth grade, playing offensive tackle.

“But I like defense better,” he said. “I like the sound it makes when you hit somebody. I like to hit.”
At 6’2” and 290 pounds, Thomas said he believes he can make an impact early.

Academically, Thomas said he will dedicate himself to making the grades in the classroom as well.

“I make A’s and B’s with a few C’s,” he said. “I’ll work hard to keep my grades up. I’ll have to if I want to play football and I do.”
Thomas’ career plans are to be physical therapist or to go into sports medicine.

“I want to stay around sports,” he said.

As for being so far from home, Thomas said he’s not worried about getting homesick.