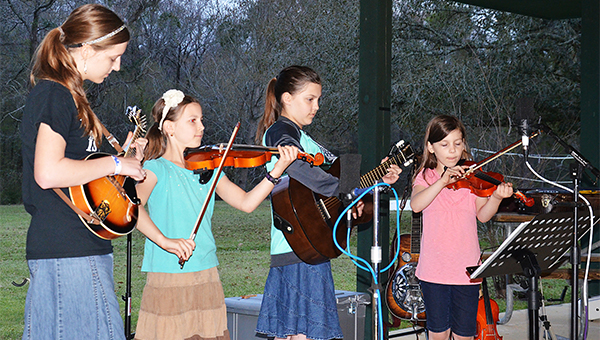 Messenger Photos/Jaine Treadwell
The Friends of Blue Springs State Park hosted “Pickin’ at the Park” Friday and Saturday nights in Blue Springs. The Byrd Family from Newville took center stage Saturday night. Pictured are Ellie, Jolie, Annie and Lucie. The Henderson Connection is made up of pickers who frequent The Henderson Music Park.

“The ‘Friends of Blue Springs” is a group of people that want to make sure that our state park stays open,” Tharpe said. “We are a small park but it is a great park and a real asset to our area. It provides a place for recreation for our community and it attracts people to our area. The state park is a vital part of Blue Springs.”

The Friends of Blue Spring State Park was organized for the purpose of raising funds to assist with the upkeep of the park.

“‘Friends’ is a non-profit organization,” Tharpe said. “All of the money that we raise goes to the park. We recently purchased 10 new grills and we are in the process of improving the volleyball court and have other plans for other upgrade to our facilities.”

To make improvements to the park, the “Friends” organization has fundraisers such as “Pickin’ in the Park” that was held Friday and Saturday nights at the park’s pavilion.

Gloria Peters, who works for the park, said “Pickin’ in the Park” was a big success.

“According to the radar, rain was headed right toward us Friday night and that kept the crowd down,” Peters said. “But, the rain skirted right around us and we ended up with a pretty good crowd and we had a real good crowd on Saturday night.”

The “Henderson Connection,” as the bunch from Ole Rex’s Bluegrass Jamboree likes to be called, came out in strong numbers to support the state park. Other bluegrass and gospel groups donated their time and talents to the fundraiser for Blue Springs State Park.

The Byrd Family, four sisters and their younger brother from Newville, was  just one of the groups that performed on Saturday night “because we love to sing and we love Blue Springs,” said Ellie Byrd, the oldest member of the group.

Peters said a lot of people love Blue Springs and it’s for the love the park and the community that “Friends” was founded.

“Friends of Blue Springs” also plans activities and events at the state park including an Easter egg hunt in April, a yard and craft sale in May, the Shane Owens concert in August and a Blue Springs Boogie 5K Run to be announced.

“We have a great park with great camping and picnic facilities and a spring-fed pool that is like no other,” Tharpe said. “We invite everyone to visit Blue Springs for the day or come for the weekend or stay all week long. Every time you visit Blue Springs or attend one of our events, you’ll be helping keep our state park open.”