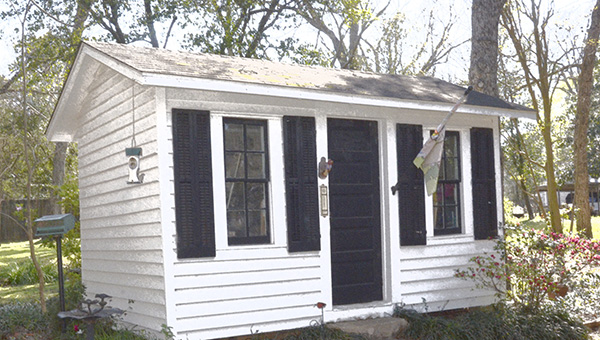 This small house once owned by Jim Tom Brantley was home to young German soldiers who had been imprisoned during World War II. A letter from one of those soldiers written to Brantley was preserved for future generations and shared recently by grandson Neal Brantley.

Some, but only a few, local people remember when a German POW camp was located in  Pike County during World War II.

Many of the stories that were told about the POWs who were “hired out” to do menial work around the homesteads and hard work in the fields have been lost.

Those young German soldiers who were “imprisoned” have long been forgotten. Few of them were heard from after they were “released.”

Neal Brantley, a former resident of Troy, has a keen interest in history, especially when it relates to his hometown.

He has heard stories of the time, around the 1943, when thousands of German POWs were sent to the United States. Many of the POWs came to Alabama and some ended up in Troy where they were hired by local residents to do work for them.

Neal Brantley said his grandfather, Jim Tom Brantley, hired one of the POWs to work for him for a while.

“The POW helped by grandfather with the peanut harvest,” Brantley said. “While the POW worked for him, he lived in a small house behind my grandfather’s house on Murphree Street.

“After he left my grandfather’s employ, he went many places. After the end of the war he ended up back in Germany. In 1947, he mailed my grandfather a letter that told of his journey to get home after the war.”

Brantley thought the letter was worth sharing with those who remember and those who just might be interested.

I daresay you’ll be surprised at hearing from me, since it is ages nearly 4 years ago I worked on your farm as a POW. Four weeks ago I returned home from imprisonment and if I remember right, I told you in 1943, while there we worked in the peanuts harvest, that I would write you when I got home. So I will do what I promised.

I have been exactly 4 years POW and today I am glad to say, the time I spent in America was the best. I like to remember the short time I spent in Troy, at the lovely concerts of the boys and girls of the high school and at the good understanding with the farmers. Really a time without sorrows! Until the end of the war I had been stationed in Ft. McClellan, Alabama, and since October 1945 until February 1946 I got a job as a waiter in the officers club in Mobile, Gulf of Mexico.

In New York, where we arrived in 1943 aboard the “Queen Mary”, we left America aboard the “Tuffs Victory” to sail to Europe. All we thought, we would be repatriated, but we were disembarked in Antwerp, Belgium. There we waited in a period of hunger and misery. All that, we liked to suffer hoping to get home. Therefore, two months later, we were very disappointed as we crossed the channel and arrived in England. There I had to spend another year of imprisonment, but under harder conditions as America. So you may believe, I very rejoiced as I were repatriated to see my parents, brother and sisters. – All that what was spared of that horrible war. Me, by myself, lost all material beings, and now I have to fight against hunger and misery, but I hope to make it with energy and goodwill.

Please, overlook my mistakes in writing, and I would be very glad to hear anything about you, that I am able to extend my english-knowing.

Brantley said there is an interesting note to the story of the German POWs.

“Mrs. Violet Ervin told a friend of mine that once when a truck full of German POWs were being driven down a street in Troy, Mrs. Blumentritt, a native of Germany, called out to them from the sidewalk, ‘How goes it?’ in German,” Brantley said.

“They replied and called back to her in German also. She said the POWs were very happy and surprised to be spoken to in their native German tongue.”