WALKS OF FAITH: Men walk highways for God and Country 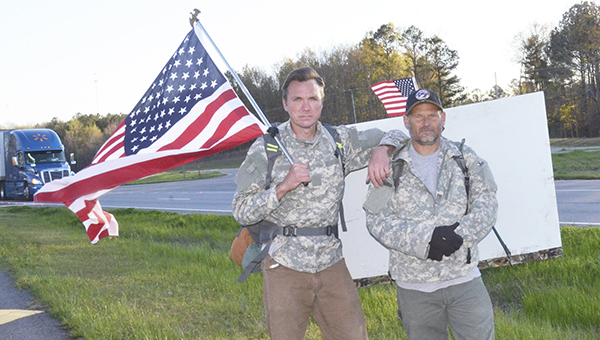 John Derrick Smith and Bryan Reynolds of Old Homosassa, Florida began walking Southern highways two years ago in an effort to reach people for God and to honor America and its heroes. Smith and Reynolds have been all over from Florida to Georgia to Alabama and Tennessee. This week, they made their way through Pike County.

Motorists in Pike County had two good reasons to honk their horns the last couple of days – in recognition that God is Supreme and in honor of the Flag of the United States of America.

John Derrick Smith and Bryan Reynolds of Old Homosassa, Florida have been walking the highways for two years now in an effort to bring awareness to the need for God’s voice to be heard in the world and to honor America and its heroes.

“We are walking in faith at a time when people are stepping away from their faith, when people have lost their faith,” Smith said. “We must bring faith back into our lives and into God’s world. That is our only hope for the world.”

The men began their walk after Smith’s mother was publicly healed. He was led to step out and be visible in the world. They walked out in faith believing their journey along busy highways would be a catalyst that would, in some small way, help bring faith into the world.

Reynolds had moved to Smith’s hometown from New York. Both being true believers had become friends. Reynolds joined his friend on a walk of faith.

Reynolds walks the busy highways carrying the American Flag. Smith shoulders a sign that reads: Walk for God World and in support of America’s troops, veterans and fallen heroes.

“We are walking, for God, for our veterans, our fallen heroes, our first responders – firefighters, police officers, state troopers – for everybody that does good for others. We are a part of God’s Army and its mission is to bring faith back into the world.”

Smith and Reynolds have taken their mission along highways in Florida, Georgia, Tennessee and Alabama.

“We use Purple Heart Highways and highways along trails that were used by Civil War soldiers and by Native American,” Smith said. “Our destination for now is Nashville. Then we’ll decide where we’ll go.”

Reynolds said the journey is a continuing one.

“It’s a never-ending trek,” he said. “Only when God tells us to stop will we stop.”

The men are not asking for donations. Their prayer every morning is for safe “travels” and openness to their mission.