Duke downs Troy in first round of NCAA tourney 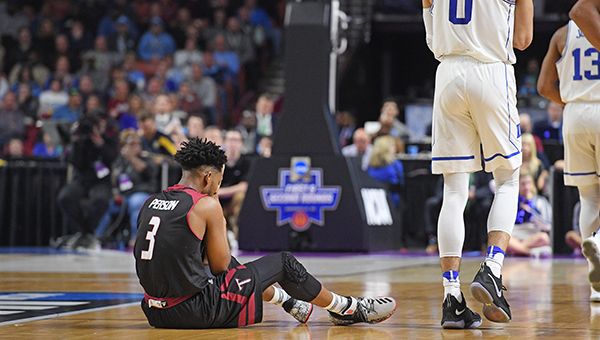 GREENVILLE, SC – Troy never let Duke fans get comfortable, but the Blue Devils were able to keep the Trojans at arm’s length all night on Friday en route to a 87-65 win in the first round of the NCAA Men’s Basketball Tournament.

The Trojans cut the Duke lead to just nine points early in the second half, however Duke did what Duke does. Relentless defense and white-hot shooting allowed the Blue Devils to stay just out Troy’s reach down the stretch.

“We get down 16-4,” said Cunningham. “So we just kept talking about chip away, chip away, and get back in this thing. And we did to our guys credit. Because that’s one of those things when you you’re down 16-4, it can get away in a hurry against a talented team like that. We didn’t allow it to happen even in the second half. We got it down to 9, but never got it to the point where we made the pressure mount on them. A bucket here or there and it kind of would have flipped the other way, and they would have had all the pressure on them as a higher seed.”

Every single time Troy (22-15) would seemingly make a run, Duke would fend off any advance.

Wesley Person pulled the Trojans within nine with a beautiful dribble, drive and dunk with 14:53 to go, but Duke (28-8) one again had an answer. Following Person’s slam, the Blue Devils hit back-to-back threes and a trio of free throws to ease back away with a quick 9-0 run.

The normally hot-shooting Trojans found the bottom of the net hard to come by against a stingy Duke defense. Troy went just 5-for-23 from beyond the arc, and in the second half – when the Trojans needed their patented long ball the most – it hit only one of 11 attempts.

“I guess it was just one of those nights. Shots just weren’t falling for us,” said Person. “But we did some other things on offense good tonight like driving the ball. But I thought — felt like we could have cut down on turnovers early and kept it close. Maybe we would have altered the outcome a little bit.”

After a rocky start to the game, which saw Troy turn the ball over three of its first six possessions, the Trojans seemed to settle down, but it was too late and Duke was too hot.

Duke shot the lights out in the first half, shooting 53 percent from the floor and a whopping 10-of-17 from behind the arc. The long-range outburst was something new for the Blue Devils. Duke averages only eight made threes a game.

“We knew coming in that they’re a good shooting team,” Person said. “Our turnovers and breakdown in transition led to some open looks. Once they got it going, they just kept it going throughout the game.”

A six-point spurt in the late in the first half gave Troy hope for a rally, however the Blue Devils answered with a 9-2 run of their own to close the first half.

Grayson Allen, Duke’s polarizing guard, crushed Trojan spirits by burying a long three to close the opening stanza. Allen was perfect from the floor in the first half.

“We’re usually a pretty good 3-point shooting team, but tonight we only shot 22 percent. And that definitely hurt us,” said Troy guard Kevin Baker. “Especially because they shot the 3 so well. They hit a lot of big shots, tough shots, and it seemed like every time we came back and made a run, they would come up with a big shot.

Despite the first-half issues, Troy never allowed Duke to get comfortable until late in the second half. The effort and attitude didn’t go unnoticed from legendary Duke coach Mike Krzyzewski.

“I was really impressed with Troy and how they prepared for us,” Krzyzewski said. “I thought they did a really good job – I thought we played well. It’s a 20-point game, but it was a hard, hard 20-point game because they played so well.”

Jordon Varnado led Troy with 18 points and 15 rebounds to notch his sixth double-double of the season. Person added 15 points and Alex Hicks dropped 14.

While the second-ever trip to the NCAA Tournament for Troy didn’t end with a historic upset, the team didn’t hang its head. The Trojans closed the year winning 10 of its final 12 games and the Sun Belt Conference Tournament, and changed the direction of the program. Prior to the big turnaround in 2016-17, Troy had suffered through six consecutive losing seasons.

Cunningham said the team put the pieces in place over the offseason, but ever he is surprised the turnaround happened when it did.

“What we did is we signed three guys in the spring that we knew could help push this team over the edge,” Cunningham said. “We had eight of our top nine guys coming back. We probably thought it was a year away, a year ahead of schedule, but to just get to where we are today, from where we are last year, not only is it amazing for the team, but it shows how things can change.”