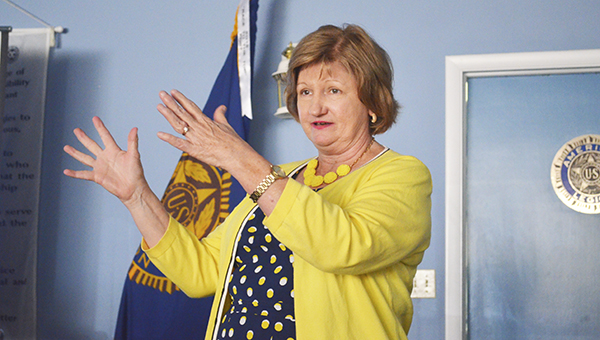 Acting Chief Justice Lyn Stuart addresses the crowd at Thursday’s meeting of the Troy Exchange Club about the need for more funding in the court system.

Stuart took over the role of Chief Justice on May 6, 2016, after Roy Moore was suspended from the position. Stuart didn’t speak on that, however, instead spending her speaking time focusing on the importance of funding for the state’s judicial system.

Stuart told the nearly 50 attendees that an adequate amount of funding is necessary not only to maintain the integrity of the court system, but also to correctly separate the powers of each branch of the state’s government.

“We try to remind legislators that we are a branch of the government,” Stuart said. “Separation of powers requires adequate funding of the court system.”

Local court costs keep the system from being unified and court costs can vary in different counties by up to $250, she said.

“It becomes an access to justice problem,” Stuart said. “We don’t need a pay-to-play system. We need the Legislature to appropriately fund the court system. It doesn’t do much for the integrity of the court system.”

Stuart also said a commission is to be formed by 2018 to begin deciding where judges are most needed across the state.

“This allows judges to be placed where they are needed and save money for the taxpayers,” Stuart said.

The court system is sending 34 new judges to the National Judicial College for training, with 24 judges already set to attend in April.

“The people of Alabama deserve the best judges they can get,” Stuart said.

“For the first time in over 40 years we tried an impeachment of a sheriff,” Stuart said. “The eight of us deliberated and decided the facts provided were cause to uphold it.”

Stuart said the sheriff, Tyrone Clark of Sumter County, faced allegations including human trafficking and promotion of prison contraband. Clark has since been indicted on the charges.

Elizabeth Grantham, president of the National Exchange Club, also visited the local chapter and expressed her pride in what the group has done.

“You have done what we want every club to do and that is to grow Exchange Club,” Grantham said. “This club has been here for 40 years and we want you to be around 40 plus, plus, plus years. You do a lot for your community.”