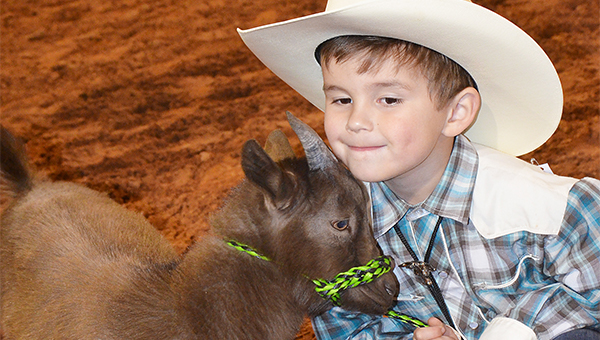 Local kids got to show off their goats at the 75th annual Pike County 4-H Steer and Heifer Show Saturday. Above, Roger Currie shows off his goat.

Juanita Bush was also a member of the inaugural group but was not in attendance.

“The 2017 steer and heifer shows were very competitive and all of the 4-H’ers did an outstanding of job raising their animals and showing them,” Wesley said. “We look forward to the district and state competitions are Garrett Coliseum in Montgomery this week.”

In Class 2 of the Heifers division, Brandon Cuahua and Tina, took first place honors and Phenix Griffin and Goldie were in second place.

Wesley expressed special thanks to the sponsors of the 75th Annual Pike County 4-H Steer and Heifer Show.