The City of Troy is officially kicking off it’s “Go Local– Shop Troy” campaign to promote small businesses and residents taking care of all shopping needs right here in the city. 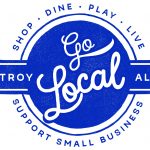 “Small businesses are vitally important to our economy,” Reeves said. “They brings jobs to our community, of course, and that money supports governmental agencies, schools, emergency services and nonprofit organizations.”

When someone makes a purchase in Troy, 2 percent of the sales tax goes to the city, which Reeves said generates a substantial amount of revenue for the city each year. Shopping locally in throughout Pike County sends 1 percent of proceeds to Troy Regional Medical Center, 1.5 percent to the local public schools and a half percent to the county.

Reeves said the campaign extends beyond just downtown Troy, which has been a primary focus for the city to revitalize recently. The city recently drafted a 10-year plan for revitalizing downtown, but Reeves said that it isn’t the only area of business that the City is seeking to help.

“We’ve been working in the downtown area for some time trying to promote those businesses” Reeves said. “We wanted to reach beyond just the downtown and the Square. All of our businesses are just as important. We have a lot of unique places to visit.”

Reeves said the idea is to get as many local businesses as possible to participate with the campaign. For instance, the businesses will be able to send content in that they want posted on the campaign social media sites.

In addition to helping the local economy, Reeves said shopping local enhances the quality of life for residents.

“It’s important to have the quality of life that shopping local creates,” Reeves said. “It allows us to grow.”