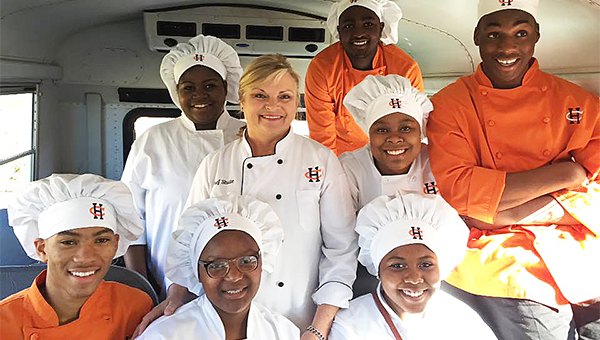 A culinary arts team from Charles Henderson Hgih School, along with instructor Paula Shute, will head to Houston next month to compete against nine other teams from across teh country to have their recipe chosen as a true-blue space food. The group advanced from a statewide competition at Huntsville that was held on February 16. Members of the team are Kelshun Campbell, Ashley Ensley, Aaron Kelly, Rhezgeine Dobbins, Danyzhja Golay, Natasha Harge and Quintasha Brooks.

Charles Henderson is sending a team of seven culinary arts students to Houston next month to compete in the final stages of a cooking contest for NASA.

The high school sent two culinary teams to the U.S. Space and Rocket Center in Huntsville a few weeks ago to compete against 10 teams from five other schools for a spot in the finals. This team was selected to move onto the final group of 10 to compete at the Johnson Space Center in Houston on April 10.

The competition is part of the culinary challenge for NASA’s “High Schools United with NASA to Create Hardware” program (HUNCH). The program was initially created for engineering students but expanded to include culinary arts three years ago when some astronauts began requesting new food options.

Paula Shute, the culinary arts teacher at CHHS, said there’s a lot more to the competition than making a tasty dish.

“The biggest thing is the nutritional guidelines,” Shute said. “We really had to break it down and tweak it to get it right.”

Nutritional guidelines account for 60 percent of the recipe’s score. An essay describing what the students learned is another 25 percent and a short video of how the food was prepared counts toward the final 15 percent.

Of course, the food has to taste good.

“We had to take out the butter and the sugar,” Shute said. “When you do that, it’s hard to make food taste good, but we came up with something really nice.”

This year the student teams were asked to create dessert. Previous competitions had teams make entrees and side dishes.

Kelshun Jabar Campbell, one of the team’s members, said it was a difficult competition.

“It was tough,” Campbell said.

“There were a lot of other good schools there. Bob Jones is a really good school, but we had a plan ready.”

Campbell said the team is not changing anything for the final round. “We’re preparing the same way we did the first time,” he said.

Danyzhja Golay, another team member, said the hardest part of the competition was finding a recipe and tailoring it to the nutritional guidelines while maintaining a good taste.

“We had to add in and take off here and there to get it to where it needed to be,” Golay said.

In addition to the strict nutritional guidelines, the desserts were required to be compact and consistent enough so that it wouldn’t break apart in a zero gravity environment.

The prize for winning the competition is having the recipe recreated and processed for astronauts to eat on the International Space Station.

“The thought of astronauts enjoying something we made while they are in space is cool,” said Natasha Harge, another of the team’s members. The other members of the team are Rhezgeine Dobbins, Quintasha Brooks, Aaron Kelly and Ashley Ensley.