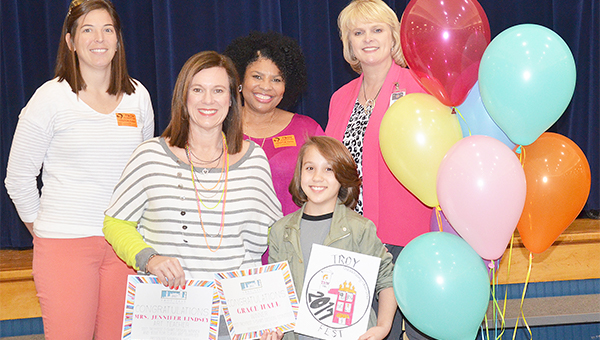 Grace Hall, a TES fifth-grade student, was announced Thursday as the winner of the 2017 TroyFest T-Shirt Contest. She will receive the first 2017 TroyFest T-shirt. The T-shirts will be available for public sale the week before TroyFest, April 29-30. Pictured with Grace on left is her art teacher at TES Jennifer Lindsay. Back from left, Tessa Paul and Catherine Jordan, City of Troy, and TES Principal Teresa Sims.

Grace Hall loves her hometown. She loves everything about it. From its history, to the arts, to the people that make it all happen.

So, when the Troy Elementary School fifth-grader was announced Thursday as the winner of the 2017 TroyFest T-Shirt Design contest, she was doubly excited. First, that she had won the contest and then knowing, that wherever the TroyFest T-shirts are worn, people will know about “our town Troy.”

Grace was having lunch Thursday when Catherine Jordan, contest co-coordinator walked into the TES cafetorium to announce the winner of the 2017 TroyFest T-Shirt Design contest. When Grace Hall’s name was called, her first reaction was surprise and then unbridled excitement.

“The smile on her face told it all,” Jordan said. “Grace’s designed captured the entire scope of what TroyFest is about – the arts, music, history and community. Her design is outstanding and we are proud to have Grace Hall’s design for the 2017 TroyFest T-shirts.”

Jordan said Grace’s design was chosen from more than 400 entries from city, county and private schools in Pike County and by an independent judge who had no knowledge of the students’ names or the schools.

“This is quite an honor and Grace is very deserving,” Jordan said.

Grace accepted the honor with a huge smile and praises for Troy and TroyFest.

“Our town Troy is all about history and great things happen here and Troy’s still growing,” Grace said.

When thinking about a design for the TroyFest T-shirt, Grace said she thought about the historic buildings around the square and the water tower that is a constant reminder of just how “historic” the city is.

“I wanted to put the water tower in my design to show how old Troy is and one of the historic buildings,” Grace said. “In the windows I put things like art, music and comedy –just some of the things we have at TroyFest.”

“Grace enjoys art and she sees art in everything around her. She is very talented,” Lindsay said. “She is thoughtful and does her best in all that she does. Her design was very well thought out and very well done.”