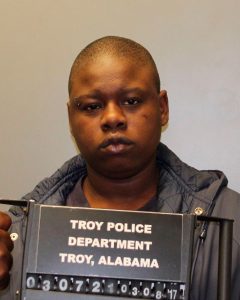 The Troy Police Department has captured a suspect in the murder of a 65-year-old man found Monday at a residence in the 100 block of Daisy Court.

The suspect, Alexis Shantell Boswell, 25, was found by the Jackson Police Department just before midnight Tuesday. Troy police travelled to Jackson to pick Boswell up.

Troy Housing Authority personnel found the body of Bernard Farrior at approximately 11 a.m. Monday and notified police. The department immediately launched a death investigation, upgrading it to a capital murder case on Tuesday and releasing Boswell’s identity as a suspect.

Boswell is being held without bond at the Pike County Jail.