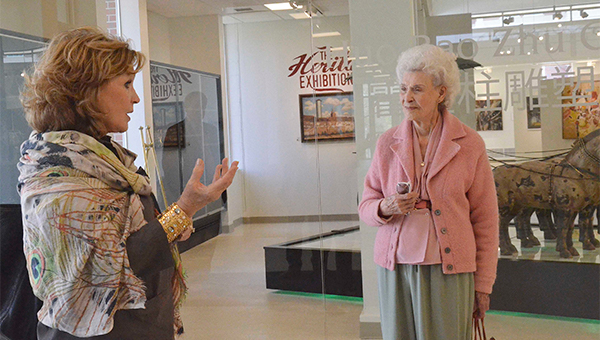 Former First Lady of Costa Rica Henrietta Boggs MacGuire was the honored guest of First Lady of Troy University Janice Hawkins last week but there was little reason for formality between the two ladies.

Although they have led very different lives, their like interests in history, the arts and travel have forged a bond of friendship between the two “First Ladies.”

Their lives came together through a shared friendship with Montgomery Mayor Todd Strange and Troy University’s networking with a university in Costa Rica.

However, the connections between the two First Ladies were all too brief.

“We would see each other only a couple of times a year and would always say, ‘let’s have lunch,’ but never seemed to have the opportunity,” Hawkins said.

MacGuire, a resident of Montgomery, is originally from South Carolina but studied at Birmingham Southern College in the late 1930s. While visiting her aunt and uncle in Costa Rica, McGuire met, fell in love with and married Jose “Don Pepe” Figueres Ferrer, who helped install democracy in his homeland in 1948.

Ferrer had condemned the corruption and communist influences in the sitting Costa Rican government and was arrested and imprisoned. He and his wife, Henrietta, were forced into exile in Mexico only to return two years later with plans for a revolt. Ferrer led the successful revolution. When it ended, he became Costa Rica’s president and is hailed as the Father of Democracy in Latin America.

“The dates worked out so that we could get together and Jack and I were excited to have lunch with Henrietta and for her to visit the park and the art center,” Hawkins said She added that MacGuire has traveled the world and has seen many of the great works of art. The invitation to visit Troy University was an opportunity for her to see the university’s international education efforts through the arts including the 200 replica terracotta warriors by artist Huo Bao Zhu and the Warriors Unearthed interpretive center by artist Frank Marquette.

Troy University has gifted two replica terracotta warriors to the Montgomery Museum of Fine Arts and also a statue to the Shakespeare Sculpture Garden.

Hawkins gave MacGuire a personal tour of the International Art Center including the Fred “Nall” Hollis Gallery which features Nall’s works dating back to the 1960s and the Huo Bao Zhu Gallery featuring heritage art.

MacGuire said she greatly appreciated the opportunity to have lunch with her Troy University friends and to tour the park and center. MacGuire said what Troy University is doing to promote the arts locally, nationally and internationally is remarkable. She commended her “friends” on leading the way and stressed the importance of what they are doing in furthering the arts.