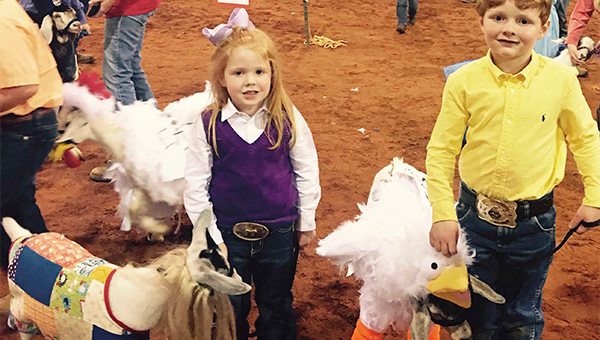 Pike County kids and their “kids” will be on parade during the 2nd Annual Goat Show sponsored by the Pike County Cattlemen and Cattlewomen Saturday night at Cattleman Park. The youngsters have raised their goats since November and the four-footers are now family pets. Pictured above are brother and sister Asa and Lou Lou Thompson and their goats, Asa’s goat dressed as a chicken and Lou Lou’s goat as Miss Dolly Parton in her “coat of many colors.”

The Pike County Cattlemen and Cattlewomen will host the 2nd Annual Kids’ Goat Show at 5:30 p.m. Saturday at Cattleman Park.

Twenty-three kids ages three through eight will show the goats they have been raising since November. Their hopes are to earn the coveted title of “Top Goat” in their age division.

Ammie Thompson, event chair for the Cattlewomen, said the Pike County Cattlemen and Cattlewomen’s Goat Project has grown tremendously in just one year.

“Our first year, we had 13 kids participating,” Thompson said. “This year, we have 30 kids involved with 23 to 25 of them showing Saturday night.”

Thompson said the Goat Project is a gateway program designed to spur interest among young people in agriculture, livestock and the everyday care of animals.

“The Pike County Cattlemen and Cattlewomen got the goats for the kids in November and they drew numbers to see which goat they would get,” she said.  “The kids were then responsible for taking care of their goats.”

The three- and four-year old children got miniature and Nigerian dwarf goats. The older kids got standard breeds.

“We recently offered a clinic for the kids to teach them how to trim the goats’ hooves,” Thompson said. “A professional cattle groomsman was there to clip the goats’ hair and clean them up so they would make a good showing.”

The clinic also offered advice on showmanship in the ring, so the kids and their “kids” should be ready to show on Saturday night, Thompson said.

A fun addition to the goat show is the costume division, which will be around 5:30 p.m.

“If you want to have a lot of fun and enjoy laughing, you won’t want to miss the goat costume parade,” Thompson said.  “Last year, we had goats that were dressed as a chicken, as Dolly Parton, Donald Trump and as Super Heroes. I can highly recommend it.”

Thompson expressed appreciation to the parents who have been supportive of the Pike County Goat Project and especially the kids who have done a lot and learned a lot.

“This was a family project,” she said. “The parents assisted with the purchase costs of the goats and have certainly been involved with the daily care of the animals. We thank everyone who has been a part of this project.”

Following the Pike County Cattlemen and Cattlewomen’s Goat Show, the celebration of the 75th Pike County 4-H Steer and Heifer Show will get underway.

“The steer and heifer show is a milestone celebration for the Pike County 4-H Steer and Heifer Show,” Thompson said.  “We are excited that the Cattlemen and Cattlewomen’s Pike County Goat Project can be a part of the celebration.”

The night’s events will begin at 4:30 p.m. with a hamburger supper, followed by the Goat Show and then the 75th Annual Steer and Heifer Show.

The public is invited to come out in support of these young people and their projects.