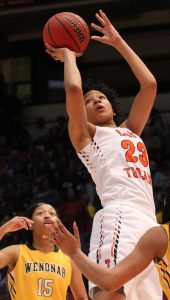 Maori Davenport scored 20 points, pulled in 25 rebounds and blocked a state record 19 shots in a 55-52 loss to Wenonah Saturday in the Class 5A AHSAA State Championship final game

Davenport, a 6-4 center, had a phenomenal game for CHHS with a triple-double, scoring 20 points, pulling down 25 rebounds and blocking a state-record 19 shots, but Wenonah played a suffocating press-defense, forcing 34 CHHS offensive turnovers.

CHHS fought to an early 12-10 first-quarter lead, Wenonah led 24-21 at halftime, and the Lady Dragons held a 37-32 advantage after three quarters. In the fourth quarter CHHS went up with 5:57 to play in the game on a jumper by Davenport, increased their lead to five points at 44-39 on a layup by the sophomore, and held that lead until Wenonah chipped away in the final minute and tied the game at 52-52 on a layup by Alexus Dye with 0:16 remaining.

The Lady Trojans turned the ball over twice in the final seconds and were unable to score again. Wenonah won its fourth consecutive state championship under head coach Emanuel Bell, who has battled cancer this season. The Lady Dragons are an experienced team led by seven seniors.

“I told the girls to keep fighting, because when we’ve had tough games, we’ve won them in the fourth quarter,” said Coach Bell. “I told them defense was going to win this game, and lo and behold, it came down to defense. The whole plan was to go to the basket. She (Maori Davenport) is a phenomenal basketball player, but we kept going, and it paid off in the end. After she got out of there, that’s when we took the lead.”

CHHS Head Coach Dyneshia Jones has led a very young squad to the AHSAA Final Four three times in the last four years, and is proud of their work ethic and commitment.

Many AHSAA officials also remarked the contest was one of the best state championship games they have seen in many years.

“It was a great game, and I’m proud of my girls,” said Coach Jones. “We fought to the end, no regrets, no regrets at all. I’m proud of them. Maori fought hard. She wanted it just as bad as anybody else did. She played her behind off. That’s Charles Henderson High basketball, and we are going to continue to fight. She’s gotten smarter on how to block shots.

“Wenonah is a very aggressive team. Tootie (Niaira Jones) handles the offense, and he (Coach Bell) did a great job on preventing her from getting the ball and forcing the others to take care of everything. That’s why he’s here, he is a smart coach. The press-break also hurt us at the end.

CHHS loses senior Brittany Brundidge, but all five Lady Trojan starters will return next season. “We always talk about getting that Blue Trophy, and this year we go home with the Red Trophy,” said Coach Jones. “Once again we are going to do the same thing we did last year. We are going to work hard and work on fundamentals and we’re going to hang that picture up of Wenonah once again. Hopefully one day we’ll come home with that blue trophy.

“It was a great year. I love their commitment and dedication to playing basketball, that’s why we are here. They are a young group, and it’s hard sometimes, like during the holidays, and not taking breaks like everyone else does during Thanksgiving and Christmas, but they are dedicated and they do not complain, and it shows.”

Coach Jones said just because the Lady Trojans return their starting lineup next year, does not mean they will automatically return to the Final Four.

“This is everyone’s goal to come back and win it,” said Coach Jones. “I want them to continue to work hard. I do not want them to think we still have two more years to go with Maori and “Too Tall,” (Tatyana Siler) and that it’s automatically going to happen. We’ve got to keep that instilled in them to work hard, because any given day, from every tournament to the regional to state, someone can take that away from us if we don’t work hard, we may not make it. It is not going to automatically happen.”