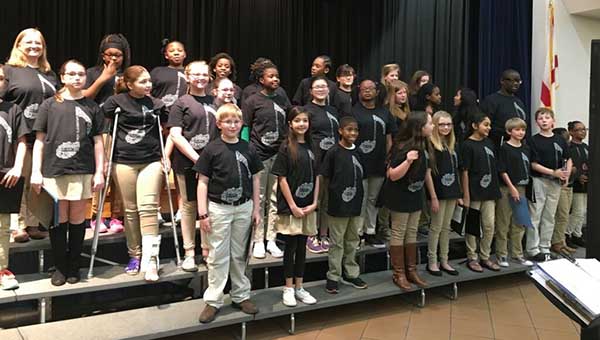 The Troy Music Study Club celebrated its Founders Day on Sunday, February 26, 2017, at the Troy Elementary School.  President Lyra Crapps welcomed everyone and expressed appreciation to the Troy Arts Council and the Troy Arts Council Auxiliary for assisting the Troy Music Study Club in hosting the Founders Day meeting.  She thanked Mrs. Elaine Blocher, music teacher at the elementary school, and the many students who were gathered to perform.

Mrs. Crapps led in repeating the club Collect and the Federation Hymn was sung, directed by Amanda Ford and accompanied by William Denison.

Mrs. Crapps introduced Mrs. Barbara Lee, president of the Alabama Federation of Music Clubs. Mrs. Lee spoke to the students, families, and guests regarding the importance of preparation for and dedication to their musical endeavors.  She encouraged them to “never give up” and to keep on practicing and preparing.  Mrs. Lee spoke of the scholarships, which are available through the Alabama Federation of Music Clubs and encouraged the students to prepare for such opportunities.

Amanda Ford, vice-president of the Troy Music Study Club, thanked Mrs. Teresa Sims, principal of Troy Elementary School, and her staff for making arrangements for the club to hold its meeting there.  Mrs. Ford introduced Mrs. Elaine Blocher, music teacher at Troy Elementary School and director of the Choir and Orff Ensemble.  The program included the Choir singing Make a Difference by Jennings, Count on Me by Mars and He’s Got the Whole World in His Hands, a spiritual which was accompanied by eight guitar students and included audience participation.

The meeting concluded with a reception served by the hosts.