Third time’s the charm: Charles Henderson advances to the Class 5A title game with win over Arab 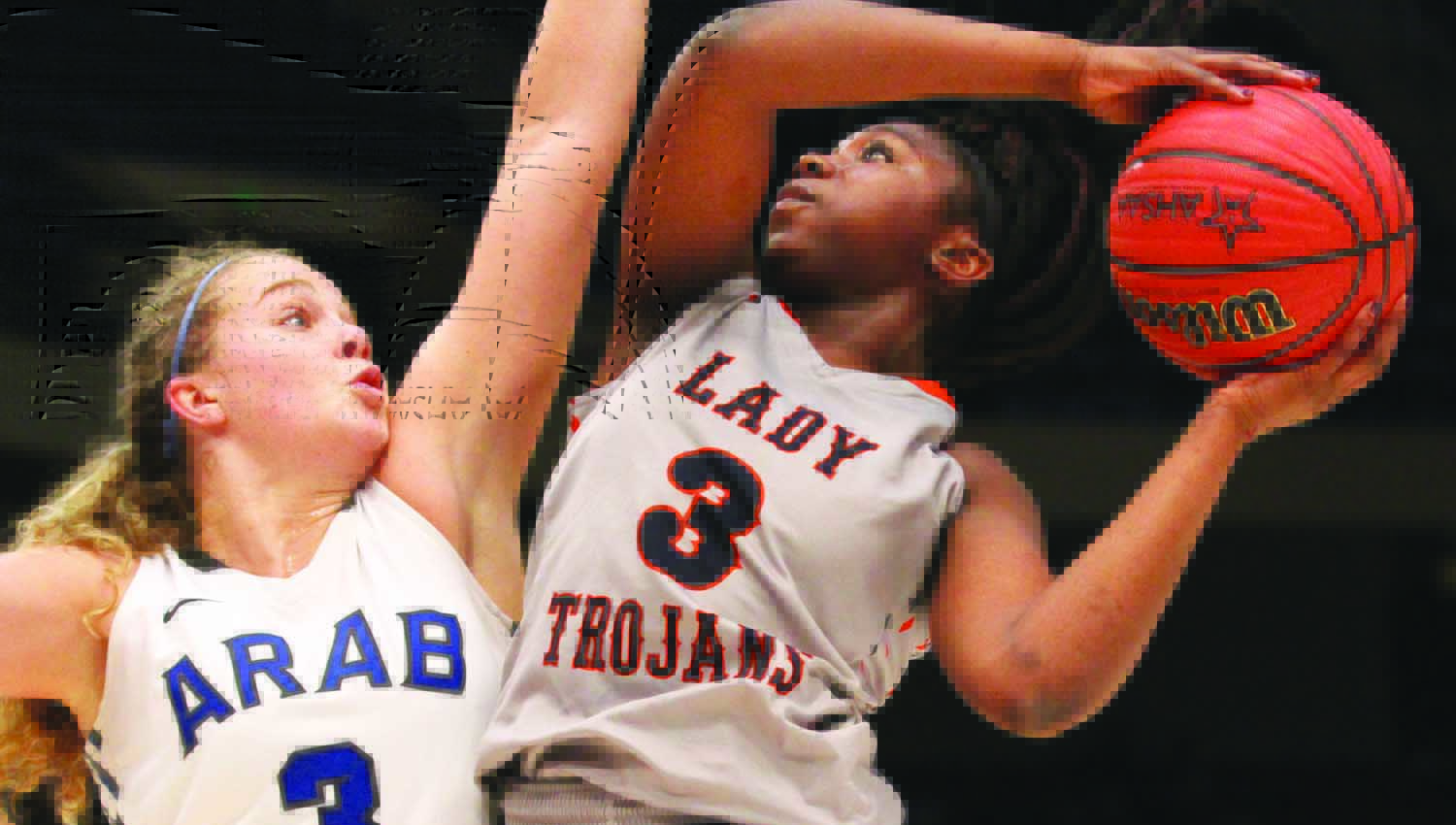 Photo/ Dan Smith
Niaira Jones (above) and the Charles Henderson Lady Trojans defeated Arab 70-53 on Wednesday evening to advance to the Class 5A State Championship game on Saturday. Jones led the Trojans with 34 points. The Trojans will take on the Wenonah Dragons at 9 a.m. In a rematch of last season’s semi finals.

BIRMINGHAM – The Lady Trojans of Charles Henderson High will play in the AHSAA Class 5A state basketball championship for the first time ever this Saturday morning, following a 70-53 win over Arab High School Wednesday night at Legacy Arena in the Birmingham Jefferson Civic Center.

CHHS, improving to 30-5 on the season, got 34 points from freshman guard Niaira Jones and 23 points from sophomore center Maori Davenport.

Head Coach Dyneshia Jones has led the Lady Trojans to the Final Four three times in four years, but in those two previous appearances CHHS lost in the first game. Last year that loss was to Wenonah, 63-51, the team the Lady Trojans will face this Saturday morning, 9 a.m., in the championship game.

“This is a great accomplishment for my girls,” said Coach Jones. “Of my 18, 19 years of coaching, we’ve never been to the finals. We’ve been to the Final Four and always lost the first game, but this is a great accomplishment. We also have a very young group making it, so I am very proud of them. This is their third time making it to state in four years. There is no stage fright, we are used to it. I wasn’t concerned at all about that.” 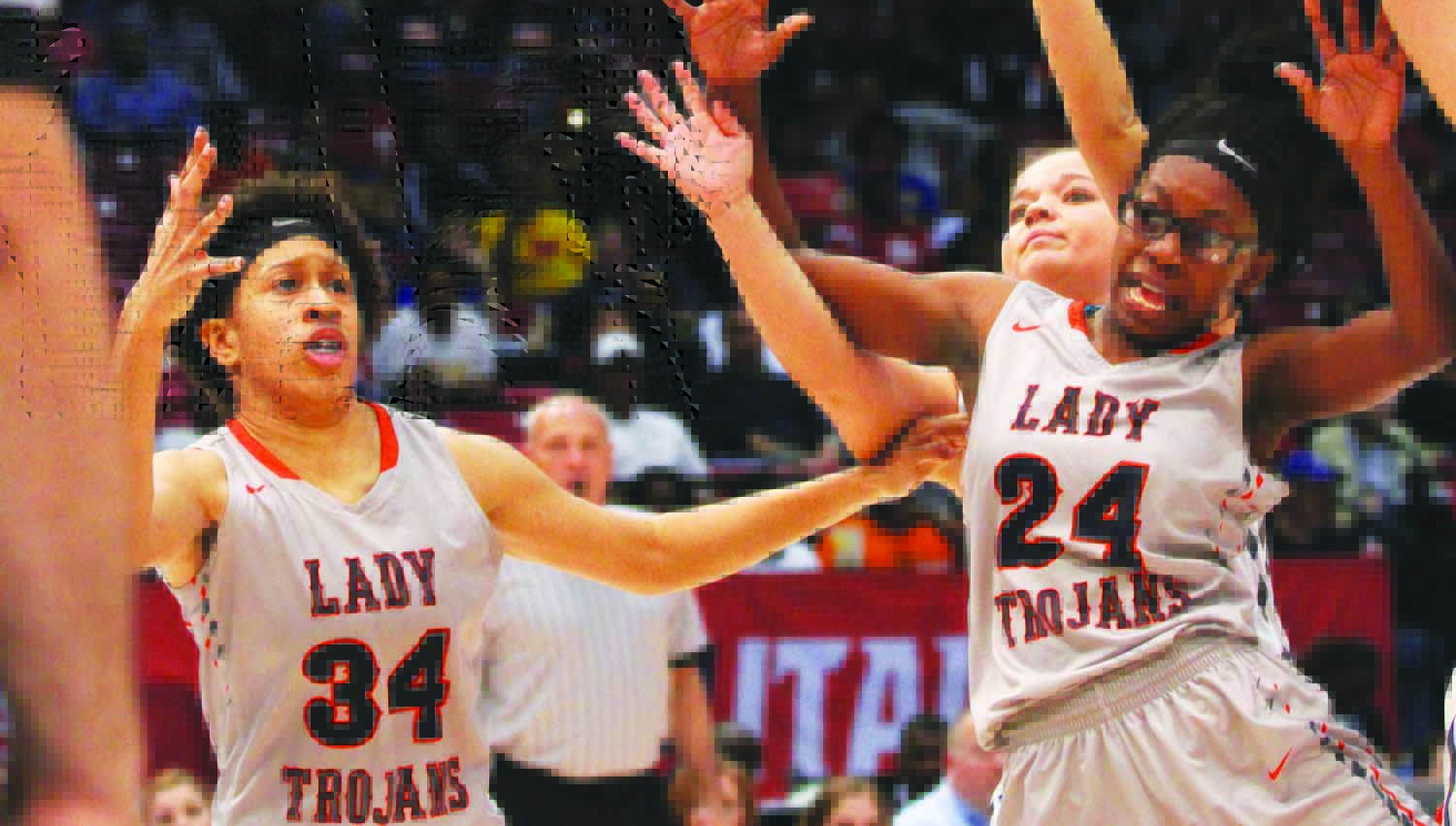 Davenport was in and out of the game with a sore ankle, and still hit 10-of-15 shots from the floor and 3-of-7 free throws for her 23 points, pulled in 13 rebounds and blocked six shots.

Coach Jones believed her Lady Trojans could have played better defense in the first half.

“I got on to them about not talking on defense,” said Coach Jones. “I told them they can talk on the phone and do all this other stuff, but in the game, I always reiterate that they have to talk. On the back door they (Arab) were easily getting up, and it got me upset. But coming back after halftime we caught on to it and moved on from there, so it did not happen again.”

While this was the first win ever for Coach Jones in state, there is no celebrating now, as their focus is clearly on Wenonah.

“We’ve been here before, there is nothing to celebrate,” said Coach Jones. “We are going to remain humble and work on what we normally work on and be ready. I don’t remember the score (from last year), I just remember Maori getting some quick fouls and me saying I would rather she stay in and foul out than keep her out and let them score points.

“If you were to come to our indoor facility, right there where we lift weights, we have a picture when Wenonah won last year. We have a picture of them – it’s in my bag right now – of when they had their parade. It’s a picture right there of when we lost – of Alaisha (Thomas) – she had her head down crying. I show these pictures to them, and they see them every day when we are lifting weights and I tell them every day, we don’t want that feeling again. No regrets. Let’s get out there and work hard and get ready for them. We’ve got a goal and Saturday is going to be it. We need the fans and the crowd and the support. It gives us energy. We need them here.”

Wenonah, 29-3, defeated Sylacauga 73-50 in the early game Wednesday in Birmingham.

Tipoff Saturday for the Class 5A AHSAA Girls State Championship game is 9 a.m. in the BJCC Legacy Arena.