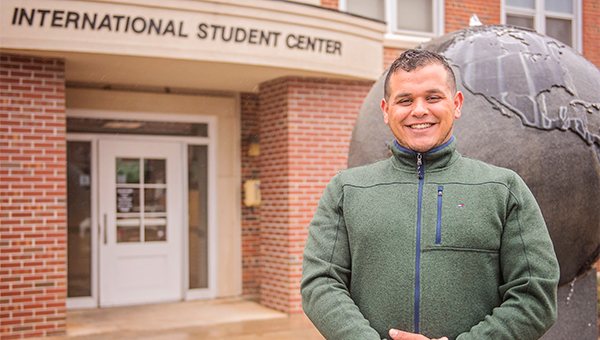 Messenger photo/Jonah Enfinger
Mohamed Anag, a Libyan student majoring in economics at Troy University, found a harassing letter on his car last week telling him to leave the country.

Troy University Police are investigating a xenophobic note left on the car of a Libyan student.

Troy University student Mohamed Anag said he found the note on his vehicle Tuesday after he got back from taking a test.

“When I opened it I couldn’t believe my eyes,” Anag said, adding the note read “Get the (****) out of my country you freaking terrorist.” (expletive deleted)

The economics major from Libya, moved in 2012 to America to begin learning English as a second language, before beginning his academic career in 2013.

Anag said this is the first incident of this kind to happen to him during his time in America.

“There are a lot of students here at Troy that support the diversity of students, and they’re welcoming other people from other countries and other ethnicities and I have experienced that,” Anag said. “I have friends from all around different states here from Florida to Tennessee. I have really good friends. I can assert that most students here welcome international students and support that Troy is the international university of Alabama.”

Troy University officials said the incident is under investigation.

“On Tuesday, a Troy University international student reported to University Police that he had found a harassing note on his vehicle” the university released in a statement.  “While this is believed to be an isolated incident, the University takes very seriously any acts of intolerance or harassment of any student.”

University police are checking whether any campus security cameras caught the perpetrator leaving the note on Anag’s vehicle at the parking lot behind Wallace Hall.

As for the person that wrote the vulgar note, Anag said good and bad people exist everywhere and that the person who wrote the letter is in the minority on the campus.

Anag said he wishes the person had talked to him to his face so they could have discussed the person’s concerns instead of leaving the xenophobic message with no way for him to respond.

“Before you make a decision based on ignorance, let’s dialogue,” Anag said. “Come and ask me questions. Why do you think I’m a terrorist? There are 1.6 billion Muslims. Just because a tiny fraction is doing bad things, it doesn’t mean we’re all the same. ISIS is trying to do it in the name of Islam, but it’s not accurate.”

The note comes at a time of uncertainty for many foreign nationals in America, in the wake of President Donald Trump’s recent executive order last month that placed a temporary ban on travel to the United States from seven Middle Eastern countries, including Libya.

Out of the nearly 700 international students at Troy, Anag is one of the handful directly affected by the executive order.

Although the judicial system has since caused the executive order to be reversed, Anag said the climate of uncertainty has put him in a serious dilemma.

Anag said he planned to return to Libya for the summer, but is now faced with a decision about whether he should continue his studies at Troy as normal or transfer to another country where he can come and go as he pleases.

Chancellor Jack Hawkins Jr. recently held a press conference and said the university is trying to calm the fears of international students and is advising students not to leave the country until the matter is settled.

Anag said the university is doing the best it can in the situation.

Although Anag said he has not made up his mind on what to do, he said the xenophobic letter would not influence his decision.

“Of course it kind of hurts and made me upset at the beginning,” Anag said, “but I’m not going to leave because you said so.  I wish I knew this person in person to give them some books to read and enlighten their mind.”