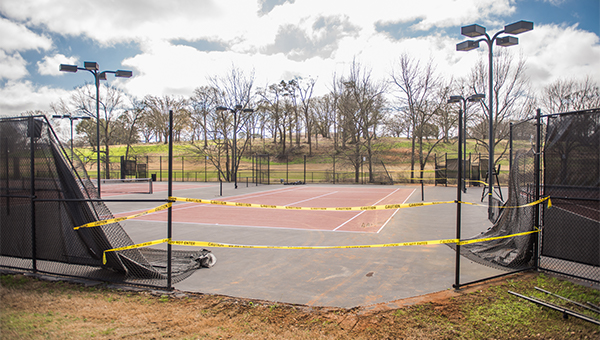 Messenger photo/Jonah Enfinger A vehicle crashed through the fences surrounding the public tennis courts this week, prompting the city to establish barricades for safety.

The Troy Police Department has installed barricades at the tennis courts across from Elm Street after a driver crashed through the courts on Wednesday.

“If a driver doesn’t stop for whatever reason, there was nothing to stop them from crashing into the tennis courts,” said Danny Barron, captain of patrol. “It’s a big concern to us because kids from our high school and university practice there. We’re doing what we can to make it safer.”

The decision to put up the barricades came after a 29-year-old woman crashed through the tennis courts at approximately 2 p.m. on Wednesday in a single-vehicle crash.

Barron said the driver reported that she lost consciousness and doesn’t remember the crash.

“It looks like she just lost consciousness and never stopped,” Barron said. “She went and hit a tree on the other side of the tennis courts.”

This is the second time in a year that a car has run through the tennis courts.

In February 2016, a woman reportedly unfamiliar with the area failed to see the stop sign on a dark and foggy night and ran through the intersection and courts.

There were four accidents at the intersection last year and only 19 accidents in the last nine years.

“That’s not really a lot of accidents over that length of time,” Barron said.

Chief Randall Barr said that four wrecks in a year for the volume of traffic that the road supports is “pretty good.”

“You’ve got to look at each accident on an individual basis and look at what caused it,” Barr said. “ I don’t think you’ll find that the road contributed to any of those accidents. There are many different things that can cause a crash.

“The evidence we see from the crash is consistent with her statement and someone that suffers a medical episode or something of that nature,” Barr said. “I don’t know of anything that you could have done there, other than putting the barricades up, to have prevented that. Nothing is going to prevent it from happening; the barricades are just there to prevent vehicle from going onto tennis courts.”

The Troy Fire Department, police department, Utilities and Environmental Services teamed up to install the barricades at the tennis court on Thursday.