Marathon begins: Trojans kick off Terry Sikes Memorial Tournament with a win and a loss 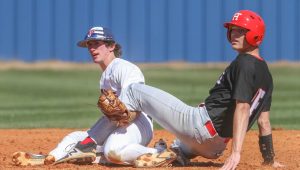 Charles Henderson High opened the baseball season with a win and a loss Friday in their first two games of the Terry Sikes Memorial Tournament, and played Prattville in a late game Friday night.

CHHS dropped a 5-4 decision to the defending Class 7A state champions, Hewitt-Trussville, and rebounded with a 14-11 win over Bibb County Friday in the second game.

The Trojans take the field again Saturday in the 10-team round-robin with a 1 p.m. game against former CHHS head coach Derek Irons and Oak Mountain, and at 6 p.m. the Trojans will battle a very strong G.W. Long squad. Both games are at Hogan’s Hole on the CHHS campus.

“I thought in the first game we came out and swung the bats real well and went up 4-0, and then we kind of just simmered down and give Hewitt-Trussville the credit, but they made adjustments through their pitching staff to offset us,” said first-year CHHS head coach Josey Shannon. “They were able to mess our timing up at the plate, but I was pleased with our first game, while this was their fourth or fifth game, I feel like we completed very well.

“The second game, even though we won I was a little disappointed in our mental strength, in our capabilities and not putting our foot down when we needed to. We had a chance to close it on out and hung around. But all in all I’m very pleased with the way we responded in the second game after the first game loss.”

CHHS took a 4-0 lead in the first game against Hewitt when Carson Tucker and Hunter Reeves singled, and Jackson Murphy drove them both home with a single. Charlie Tisdale followed with a hit, and Graham Wilkes made it five hits in a row to drive in a run. Tisdale scored on a wild pitch for the 4-0 lead after one inning of play.

Hewitt added a single run in the top of the second inning, two in the third and one in the fourth inning to tie the score 4-4. Gavin Garner reached on an infield error in the top of the seventh inning, and scored an unearned run on a fielder’s choice by Carson Skipper for the 5-4 lead and eventual win over the Trojans.

The Trojans were led at the plate by Murphy with two hits, while Carson Tucker, Reeves, Tisdale, Wilkes, Jabronski WIlliams and Devan Suddith each had one hit.

In the second game Bibb County took a 1-0 lead in the top of the first but the Trojans responded in the bottom half of the inning when Carson Tucker homered to left-center, Reeves walked, Murphy doubled, Tisdale was hit by a pitch, Wilkes walked to push a run across, Williams signed to drive in two runs and Suddith doubled to drive in two more for the 6-1 advantage.

Bibb County added two in the fourth and five in the fifth inning to cut the lead to 14-11, but that would be all the scoring for both teams.

Carson Tucker, Reeves, Murphy and Suddith each had three hits in the second game, Tisdale and Lowery had two each, while Gandy and Williams had one each in the 18-hit assault.

Grant Hughes, Noah Lowery and Graham Wilkes all worked on the mound for the Trojans.

On Friday and Saturday the Trojans will play a total of five games, which is what Coach Shannon said their team needs to find out where they stand.

“That’s what the conversation was we had with the players after the game,” said Shannon. “One of the reasons I agreed to do five games in two days was just to see how we are going to overcome soreness. After the first game of the season you are never 100 percent, whether as a pitcher or a position player. I want to see how we respond to being tired, and obviously coming back from a loss that was a good sign of overcoming adversity. The main thing to me, is trying to get their mindset to compete on every pitch, regardless of if it is the seventh inning or the twenty-first inning of a game.”