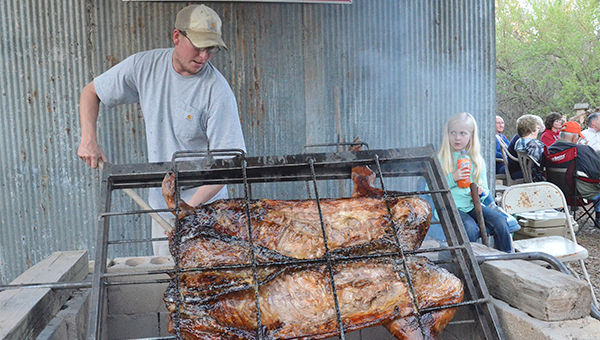 Hank Williams Jr. would be proud to know that somewhere in his mother’s old stompin’ grounds folks are still carrying on their family traditions.

Bocephus’ mother, Audrey Sheppard Williams, was a Pike County girl who grew up in a place and at a time when carrying on family traditions was commonplace.

In today’s fast-paced and high tech world, many family traditions have fallen by the wayside.

But, not so, with the pig cookin’ tradition of the Virgil Huff family of the Tarentum community. Virgil Huff’s son, Jones Huff, is making sure that the tradition of his dad’s Big Oaks Pig Cookin’ is carried on and carried on with zest and gusto.

The Huffs’ annual pig cooking started 30 years ago, when the family patriarch, Virgil Huff, decided it should be.

“Back then, we had a cabin in the deep woods around Tarentum,” Jones Huff said. “The cabin was built with the lumber from an old tenant house where my dad grew up. It was just one room with no electricity and no running water but it was good enough for hunters.”

One year Virgil Huff decided to kick off hunting season with a pig cookin’ at the cabin.

“That was the beginning of the Big Oaks Pig Cookin,’ Huff said. “Not a hog killin’ – a pig cookin.’”

For years after, the annual pig cookin’ was held at the cabin in the woods in November. Eventually the cabin was sold and the pig’ cookin’s were moved closer into town.

“November is such a busy time, with Thanksgiving and Christmas, that we decided to have the pig cookin’ at the end of deer season in February.”

The time and place changed but the tradition established by Virgil Huff continued with a generation of Pig Makers.

The original Pig Makers were Jones Huff, Larry Lilly and the late Terry “Pot Likker” Barnes.  They got their name from a feed company that put out a product called, Pig Maker. “It fit,” Jones said. “We got caps with Pig Maker on them – to identify us.

For years, the original Pig Makers were in charge of the Big Oaks Pig Cookin’. They cooked a whole hog on a spit of sorts and over an open fire. They put the pig on in the early morning hours. They slow cook the pig and basted him with “secret stuff’ until way after nightfall. Family, friends, neighbors, and a few strangers, came and brought the trimmings. They all gathered around a campfire and ate and “chewed the fat” so to speak. They roasted marshmallows and went on hayrides and just had an all around good time.

But one night as the original Pig Makers were standing over the ol’ pig and basting him with every turn, they realized that, if they wanted the pig cookin’ tradition to continue, there had to be a new breed of Pig Makers.

All the while, they are cooking the pig, as is tradition, everybody else gathers around the campfire, under a shade tree or in the barn, depending on the weather, to enjoy the company of one another. And, as is tradition, each one make a pass by the pig and pulls off “just a taste” and leaves lickin’ their fingers in anticipation of what is to come.

Just as the sun is going down, the kids load on the wagon for a hayride and, possibly, a close encounter with a welapinwampus, which was the creation of Virgil Huff’s imagination to entertain young children. “If the hayride is real quiet, the welapinwampus will come out of the woods and grab the kids off the wagon and drag them into the woods,” Huff said. “So they sing campfire songs as they ride – songs like ‘She’ll Be Comin’ Around the Mountain.’ Just old-time fun.”

The highlight of the Pig Cookin’ is the crowning of the new Pig Queen by members of the Conclave, which is made up of Pig Makers and Pig Makers in Training.

Strict rules govern the Pig Queen contest. A candidate must be 21 years old, must have attended more than one Pig Cookin’ and must eat the pig.

“A candidate cannot be a vegetarian,” Jones said.

The Conclave meets in near secret. However, it is a known fact that the Pig Makers can be bribed. And, they are. But that takes little or nothing away from the Pig Queen contest.

“Once the Conclave makes its decision, the decision is final,” Jones said. “The new queen is presented the queen’s sweatshirt which she is entitled to wear for a year. Then, it is presented to the new Pig Queen.”

And, so it was. On a cold and misty night in February 2017, a whole pig was devoured and a new Pig Queen was crowned at the Big Oaks Barn near Tarentum. And, holding with tradition, a good time was had by all.