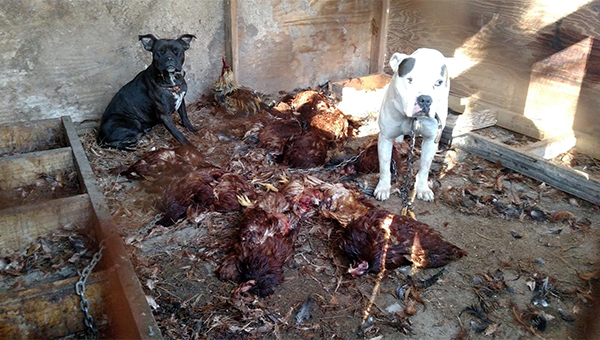 Messenger photo/Submitted
Two dogs broke into the chicken coops of Pike County resident Jean Collins last week, killing her 40 chickens. Collins’s husband trapped the dogs in an empty coop for animal control to pick up and the dogs were taken to local shelters, but neither was deemed vicious and officials said the owners have the legal right to come pick the dogs up.

Jean Collins has a dog problem, and she’s worried that other people might be facing the same problem too.

Collins and her husband Joshua awoke in the middle of the night re-cently to find that four dogs had found their way into the couple’s chicken coop and killed about 25 of their chickens.

Collins said Joshua attempted to scare the dogs off as he had done two times before earlier that evening, but one of the dogs knocked him down. Joshua man-aged to hit one of the dogs with a pipe that he had in his hand though and sent two running back into the woods, while the other two ran into an empty chicken coop.

Joshua locked the dogs inside, and since it was around 3 in the morning, de-cided they could be kept there until he could call animal control in the morning.

When Jean arrived at the home around 7 a.m. though, she found that the dogs had busted into the coop with the family’s 15 remaining chickens and had slaughtered them as well.

“All around, they killed about 40 chickens,” Collins said. “They had eaten about eight of the chickens. They were sitting there with feathers in their mouth waiting for someone to let them out.”

Collins said her main concern is that animal control did not get all of the dogs and said she’s worried that the dogs are dangerous to humans.

“I have small children that I’m worried about,” Collins said. “You can still hear the dogs coming around. One dog came up on my porch the other day. I can’t just go get a gun either because I have children in my house.”

Collins lives on Elba Highway outside of Troy city limits but inside police ju-risdiction, so Troy police responded to the call, but Pike County’s animal control was responsible for taking the two dogs pinned up in the cage to the pound.

Jimmy Simmons with Pike County Animal Control confirmed that there isn’t much that law enforcement can do in these kind of matters.

“The two dogs were taken to shelters, one at the [Pike Animal Shelter] and one at a shelter in Brundidge,” Simmons. “But the owner has every legal right to go down and get their dogs. That’s a civil matter. They would have to take it to the civil court.

“Now if there was a dog bite to a human, that would be a whole different is-sue,” Simmons said.

Collins said the dogs should be put down for what they did.

“You’re telling me they have to draw human blood in order to be considered viscous?” Collins said. “That’s just not right. They should put those dogs down.”

If Collins had lived inside city limits, the dogs may have been put down, as Police Chief Randall Barr said that’s how “vicious dogs” are dealt with.

“The way we view that inside city limits is the animal that is deemed to be vicious could be destroyed,” Barr said.

But that’s based on a municipal ordinance, not state law, and the county isn’t bound to treat the issue the same way.

The municipal code for Troy defines a dog that bites another domestic ani-mal as a vicious dog.

“It shall be prima facie evidence that a dog is a vicious dog if it shall bite or fiercely attack any person whatever, or any other domestic animal, such person or other animal at the time of said biting not being on the owner’s premises.”

Another ordinance gives the city authority to “destroy” the vicious dogs.

“Any policeman or other officer of the city exercising proper authority is hereby authorized to destroy any animal when such animal is determined by an animal control officer to be vicious or dangerous.”

Whatever the law says, there’s no doubt in Collins’s mind.

“These dogs are vicious,” she said.