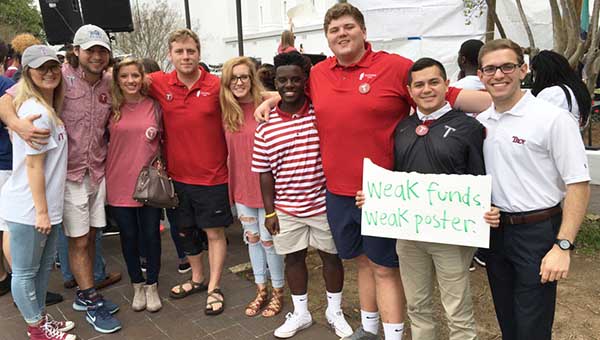 Students from Troy University joined students from across the state in Montgomery on Thursday to advocate for more funding for colleges and universities. About 250 Troy students attended the event.

About 250 students traveled down to Montgomery on Thursday to show their support for higher education, specifically for more funding.

Marcus Paramore, director of government relations for the university, said its important for students to get involved in showing their support for more funding to the State legislature.

“Higher Education Day is really an opportunity for– students, number one– but for students, faculty and staff of Alabama colleges and public universities to rally at the State House and advocate for institutions of higher learning,” Paramore said. “This give the opportunity for students to show what higher education means to them and what a college degree means to them, and to ask the State to support them through the education budget.”

Paramore said Troy University currently was appropriated about $50 million this year, which Paramore said the university wants to increase for the upcoming budget.

“The more funding we get from the state, the more resources we have to provide better quality educational programs for the students,” Paramore said. “If funded appropriately, it diminishes having to raise tuitions and fees.”

The rally is hosted annually by the Alabama Higher Education Partnership (AHEP). Gordon Stone, executive director at AHEP, described in more detail what the partnership seeks to accomplish with each rally.

“It would be significant if more Alabamians had a four-year degree because the difference in education relates directly to the state’s income earning potential,” said Gordon Stone, Executive Director of the Higher Education Partnership. “Unfortunately, the State of Alabama has allowed its appropriations to public universities to fall to approximately 27 percent of the Education Trust Fund, which is far from the 33 percent in the 1990s. With lower funding, it becomes more challenging for the average Alabamian to earn a degree.”

“During Higher Education Day, which is the largest rally of its kind, the voices of the university community will be heard and the message will be clear. Universities add income to families, economic opportunity to communities, quality of life programming from fine arts to outdoor living and solution-oriented thinking for addressing challenges throughout the state,” said Stone.