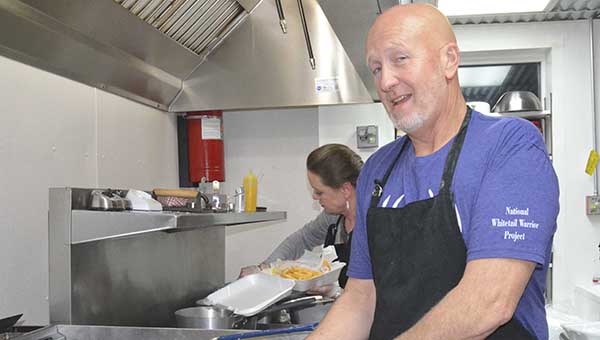 Messenger photo/Jaine Treadwell
The Corn Crib has been grilling steaks for about two months and had recently added catfish to their Friday night menu.

When friends Kim Ellis and Denny Perkins decided to breathe new life into the old country store at the crossroads of rural New Hope in Coffee County, their thoughts were to offer a place for neighbors to gather around the pot-bellied stove to catch up on the news and find out who was sick and who was better. And for a while, it was that way at the Corn Crib at the Crossroads. But no more. The cook’s in the kitchen.

At the Corn Crib, you can take breakfast by the hand. At lunch you can grab a burger or a ’dog and, at night, it’s pizza time.

And, on Friday nights, you can’t find a parking place at the Crib. Folks are lined up in all directions waiting their turns for a table or a takeout because it’s Friday night special time – hot off the grill steaks or right from the pan catfish.

Tracy Perkins, Denny’s wife, said the Corn Crib sells feed and seed, some grocery items and snacks but it’s the deli that brings the crowd. Feed sales are good, she said. But the feeding is better.

“We’re open from six in the morning until six at night Monday through Thursday and until eight o’clock on Friday nights – steak and catfish night,” Perkins said. “We close at 2 p.m. on Saturday and we’re closed on Sunday.”

Perkins said the Corn Crib has been serving breakfast and lunch almost since it opened in July 2016.

“We have a good breakfast crowd, she said. “We have biscuits, grits, gravy, link and patty sausage. We can scramble eggs but most people like their eggs fried because they put them in their biscuits.”

“We’ve been cooking steaks on Friday night for about two months but we’ve just stated frying catfish and it has caught on real well,” Perkins said. “We try to start serving around five o’clock but we have a lot of call-ins so a lot of time we’ll start frying sooner.

The Corn Crib is owned by Kim and Denise Ellis and Denny and Tracy Perkins. It is located in downtown New Hope at 5661 County Road 114.

You can get there off U.S. Highway 231 south of Brundidge toward Roten or off Highway 167 between Troy and Enterprise. If you get lost, just call the Corn Crib at 3340226-7622 for directions.