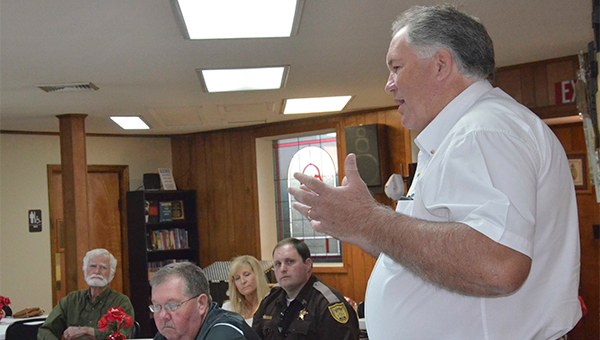 Human trafficking is the third largest international crime industry behind illegal drugs and arms trafficking. Pike County Sheriff Russell Thomas was invited to speak to the United Methodist Women Circles of Brundidge United Methodist Church Monday. Thomas said, although his department has not made a case on human trafficking, it’s probably closer to home than anyone would want to think.

Sara Bowden, president of the Rachel Rodgers UMW Morning Circle, said Thomas was invited to speak on human trafficking, a topic of growing interest and concern all across the world and Alabama, as well. “Human trafficking is not foreign to small counties like Pike or small communities like Brundidge,” Bowden said, adding that the problem might not be one of great concern locally but, “perhaps, it should be.”

Thomas said the Pike County Sheriff’s Department has not made a case on human trafficking but did not discount that one could be made “on up the road.”

“Human trafficking is a form of modern slavery that occurs in every state, including Alabama,” Thomas said. “Although, here in Pike County, we have not been affected directly, we are affected indirectly through the Internet.”

Thomas said the Internet is one of the best things that has happened for today’s world and one of the worst.

Predators use the Internet – social media – to slip into homes and lure and trap young people into risky situations, +the sheriff said.

“We used to think that human trafficking happened only in other countries but we know now that it happens worldwide,” he said. “Human trafficking is the third largest international crime industry behind illegal drugs and arms trafficking.  It reportedly generates a profit of $32 billion a year. Close to home, Atlanta’s illegal sex industry brings in nearly $290 million a year.”

Atlanta is a big city with a lot of conventions, a lot of hotels and a lot of parties going on.  Also, a big draw to Atlanta is the airport, which is the busiest in the world, Thomas said.

A big city with a busy airport and lots of parties going on is a prime place for traffickers.

“Using a computer, a man can make arrangements through a trafficker to fly in, meet a child and fly out and who could know?” Thomas said. “Computers make human trafficking easy and difficult to track.

“The women and even children who are especially vulnerable to human trafficking are the runaways, those who are on drugs and those who have been sexually abused. The average age a teen enters the sex trade in the United States is 12 to 14 years. Between 14,500 and 17,000 are trafficked into the United States each year.

Thomas said as long as there are people who are vulnerable and those who will prey on them, human trafficking will continue to be widespread and can filter into the smallest of communities. “With computers and the Internet, predators have a worldwide place to do business.”

Thomas said he is not discounting that human trafficking could be happening even in and around Pike County. With computers and the Internet, anything is possible and, who would know?

“Be aware and report any activity that seems suspicious, he said.

“Know what you children are doing. Know what sites they are searching on computers.

“If you see anything going on in your town or neighborhood that gives you reason for concern, report it to local law enforcement or the National Hot Line.”

Thomas said it’s better to ere on the side of caution, than to let a child be trapped into human trafficking.