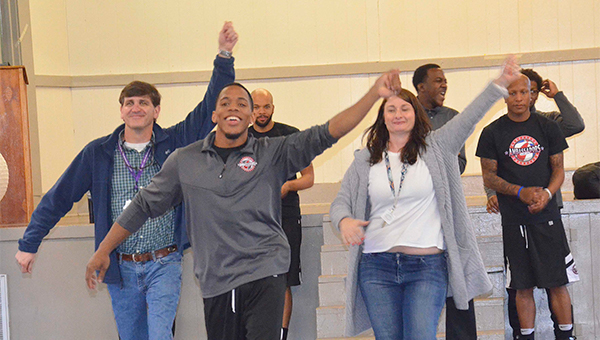 Messenger photos/Jonah Enfinger The Harlem Ambassadors took their entertaining show on the road on Friday, visiting area schools to help spread the message of being “Bully Proof.” Above, one of the players leads the teachers at Banks School in a routine to entertain the students. Below, “Yoshi” said being able to share his story with youngsters and spread a message of hope and encouragement is important. “We take being role models seriously.”

Not only did the Harlem Ambassadors help raise funds for the Pike CAC, they also visited seven schools within the county in support of East Central Mental Health’s Bully Proof Program.

“We want all of our kids to be Bully Proof,” Kidd said. “We wanted the kids to hear from the professional athletes that, even they, were not immune to bulling.”

The Ambassadors shared their individual inspirational messages. They talked about the obstacles they have overcome and the choices they made in their educations, as athletes and in their careers, Kidd said

And what athletes say often gets through to young people in a way that no others can. “Hearing from athletes, that they, too, were bullied and that they weren’t always popular and often felt left out and insecure, gives kids encouragement and gives them reasons to think positive. The Ambassadors entertained the students at seven schools and I’m sure that some of the kids got their messages.”

Harlem Ambassador Yoshives Belizair said his hope and the hopes of his teammates and coaches are that their messages will be heard.

“Pops, our assistant coach, says if we  reach out to just one kid, we did our job,” Belizaire said. “We take being role models seriously. We share our personal stories in hopes that we can encourage and inspire kids. We want them to know that many of us have been bullied. We want them to know that everything wasn’t all right in our lives but we didn’t quit; we didn’t give up. We stayed in there and, because we did, things got better and things will get better for them, too, if they just hang in there.”

Belizaire said he was often taunted because of his name, “Yoshi.”

“Kids would say, ‘Yoshi? Ha! Ha!’” he said. “They laughed at me and I could have let their laughter and words hurt me but I didn’t. I embraced my name. Now, I travel all over the country and around the world and kids, yell my name, ‘Yoshi! Yoshi!’ and it’s a positive thing.

“I tell kids to take what is being used against them and make it work for them.”

That’s the message all of the Ambassadors share as they travel city to city.

“I wanted to be a professional basketball player but I also had a Plan B,” he said. “I knew that even if I made it playing basketball, I couldn’t play forever. So, I got a degree in business. That’s my Plan B.”

Belizaire said he realizes a lot of young people have their sights set on being professional athletes – basketball, baseball, and football players.

“But the odds of that are very small,” Belizaire said. “So, I tell kids to dream your dream but have a Plan B and, hopefully, that will include your education because an education is the key that unlocks the doors to many dreams.”