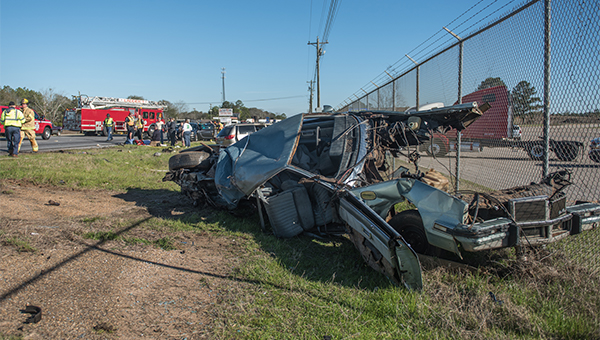 Messenger photo/Jonah Enfinger
One of the vehicles involved in the wreck lies twisted and ravaged from the collision. The fate of the driver has not been released, but troopers did say two people were airlifted from the scene and five others were transported to Troy Regional Medical Center.

Two people were airlifted to Montgomery and five others were transported to Troy Regional Medical Center after a three-car wreck on U.S. Highway 231 south of Troy.

The crash occurred at approximately 2:30 p.m. on Thursday just past Nebo Road.

The crash is being investigated by Alabama State Troopers, who had not yet released any details in their investigation of the collision at publishing time.

Trooper Kevin Cook said that the team is still working to understand exactly what happened. No names have yet been released.

One car was left twisted on the side of the road, with the engine completely ripped out of the vehicle and the cab hanging onto the hood by a thread.

The third vehicle did not appear to suffer any major damage.

Troopers did not release which injured drivers belonged to which vehicle.

The wreck shut down both lanes of U.S. 231 for over an hour.