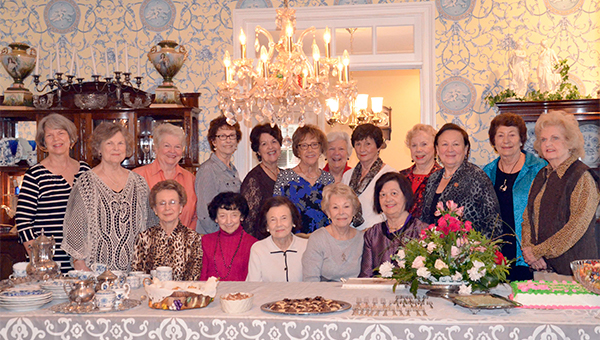 The New Century Club of Troy celebrated its 100th Anniversary on Wednesday at the home of Pat Barnett. Mary Ann Tighe complied a history of the club from club records and yearbooks and newspaper articles. She shared the club’s storied past at the anniversary celebration. Barnett, Martha Ellis, Eulalia Holston and Jean Laliberte have served the club as president in recent years.

One hundred years ago in the state of Alabama in the county of Pike in the town of Troy, 21 women gathered to form a study club that would be built upon friendship, social involvement, good works and the expansion and enrichment of their own minds.

The New Century Club of Troy was organized and federated in the early spring of 1917.

On Wednesday, February 15, 2017,  members of the New Century Club of Troy met in the home of Pat Barnett to celebrate the club’s 100th anniversary.

For the milestone event, club member Mary Ann Tighe complied a history of the New Century Club of Troy, Alabama and shared the club’s storied past with club members.

“Our first club met in the home of Mrs. J.T. Brantley,” Tighe said. “The new club chose pink and green as their colors, the rose as their flower and ‘She Can Who Thinks She Can’ as the club’s motto.”

“Although the club’s charter members didn’t have college educations or careers, they were dedicated to the enrichment of their minds, as is evident in the programs that were presented,” Tighe said.

“Only a year after the New Century Club of Troy was organized and federated, the theme for its yearbook was “Never was man so much disposed to go to France.”

The topics for study for their monthly meetings included “Early French History,”

“Charlemagne and His Empire” and “Legends of Trouveres and Troubadours.”

“There were six presenters at each meeting and the club met every other Friday, September through May, in the homes of the members,” Tighe said. “Great amounts of research and much preparation must have gone into each presentation.”

The club’s  continuing commitment to the tradition of the enrichment of minds was evident almost 50 years later.

The program theme for 1967-68 was “The Americas.” The topics included “Brazil-Crises and Change” and “Progress Report on Alliance for Progress.”

“Across the years, local newspaper articles reflected the planning that went into each meeting,” Tighe said. “Topics such as ‘The World’s Greatest Painters’ and ‘Democratic Ideals in Literature’  reflected the scope of topics presented at each meeting.”

The New Century Club of Troy was devoted to  social involvement and good works. Headlines in The Troy Messenger highlighted the club’s valuable projects.

The club gave its support to scholarships to Troy State Teachers College, the donation of books and magazines to local schools and contributions of service and financial support for conservation and child welfare.

“One of the most memorable contributions revolved around a Christmas tree in Court Square — a Christmas celebration with the ringing of bells and music by Moll’s band in dress uniform, Tighe said.

She laughingly, added that the club members evidently enjoyed attending banquets, conventions and a variety of celebrations.

“In April, 1931, the New Century Club hosted an event with the theme of ‘Mardi Gras in New Orleans in the 1880s,” she said. “The program was highly praised for its selections of music and a reading by Mrs. Charles Henderson.”

The club celebrated its 25th year with a dinner party in the Chancy Memorial Building  and its 50th anniversary in 1967 with a banquet held in the Melon Room at Grimes Restaurant.”

In May 1980, members terminated their affiliation with the Alabama Federation of Women’s Clubs. The primary reason given was in order for the club to focus on local activities, including the “town and gown” affairs.”

Other reasons were the lack of assistance from older women and the lengthy reports required.

The New Century Women’s Club of Troy’s 100th celebration on Wednesday at the home of Pat Barnett exhibited the same spirit as the women who celebrated the club’s organization in 1917, its 25th  anniversary in 1942, its 50th in 1967 and its 75th in 1992 – the spirit of friendship and commitment to community and to the expansion and enrichment of the mind.