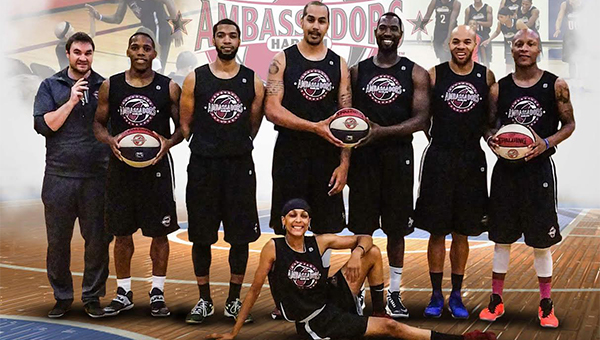 The Harlem Ambassadors (above) are coming to Troy on Thursday to help raise funds for the Pike Regional Child Advocacy Center. The event will tip off at 7 p.m. on Thursday at Sartain Hall on the Troy University campus. The fundraiser will have the ambassadors squaring off against the PRCAC’s basketball team that they have assembled for the event.

Ask Brittany Dorsey who’s going to win Thursday night’s basketball game between the Harlem Ambassadors and the Pike CAC Warriors and, she’ll say, in familiar rigmarole,  “the team that makes the fewest mistakes and scores the most points.”

Dorsey, show woman for the Harlem Ambassadors, said it doesn’t matter which team  scores the most points, because the Pike Regional Child Advocacy and Family Resource Center in Troy will be the ultimate winner.

The Pike CAC Warriors vs. Harlem Ambassadors is a fundraiser for the Pike CAC, a non-profit agency that meets the needs of children who have disclosed abuse and the needs of their families.

Game time is 7 p.m. Thursday at Sartain Hall on the campus of Troy University. The game will feature high-flying slam-dunks, hilarious comedy, audience participation and fun for the whole family, Dorsey said.

“The Harlem Ambassadors basketball team is also a non-profit organization and this game is being played in support of the Pike Regional Child Advocacy Center,” the show woman said. “This is our 19th season and we are all professional athletes who play basketball and also share our personal testimonies as a way of giving back to local communities with show night basketball.”

The team members, nine including the announcer, are skilled basketball players who play for the fun of it. The team is based in Fort Collins, Colorado, but the players are from all areas of the country, north, south, east and west.

The team members have college degrees and athletic backgrounds. Several of them have played basketball overseas. They are all mentors for kids.

“Our vision was to develop a team that would travel across the country to play basketball and share our personal testimonies in school assemblies in hopes that we could make a positive difference in the lives of kids,” Dorsey said.

At the school assemblies, the Harlem Ambassadors capture the attention of the kids with their amazing basketball skills. The kids cheer the players’ over the back dunks and their almost magical ball handling skills Then, they listen intently to what the Harlem Ambassadors have say about drug abuse, bullying and other issues facing young people today.

“The Harlem Ambassadors encourage kids to work hard in school, respect themselves and their peers, listen to adult authority figures, believe in themselves, set goals, not be bullies and focus on their education, Dorsey said.

The Harlem Ambassadors will visit local schools on Thursday and Friday. They will entertain the kids with their basketball antics and then talk seriously when they share their testimonies.

The Harlem Ambassadors’ travel schedule is about nine months. When they are not traveling, the team members are involved in activities in their hometowns, including basketball and team development summer camps for kids.

“We are extremely excited to have the Harlem Ambassadors in town for the basketball game against the  Pike CAC Warriors Thursday night at Sartain Hall,” said Camille Downing, Pike CAC executive director.

“This is a fundraiser for the CAC and we encourage everyone to come out and enjoy the basketball ball game and support the CAC and the kids and families that we serve.”