JCA performance: Spirituals will ‘move you’ 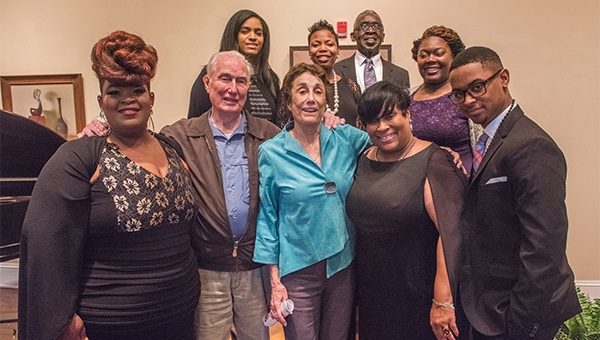 Messenger Photos/Jonah Enfinger
The Liljebergs from New Orleans were among the many who came from outside Pike County to enjoy “An Afternoon of African American Spirituals at the Johnson Center Sunday. Of the vocalists, the Liljebergs said, “they move you.” Pictured are Robert and Genevieve Liljeberg with Sheila Jackon, LaShae Money, Anna Moore, Tommy Cargill-Easterly and Ashley Knight.

Genevieve Liljeberg and her husband drove from New Orleans to attend “An Afternoon of African American Spirituals” at the Johnson Center for the Arts on Sunday.

Robert Liljeberg, an orthopedic surgeon at Troy Medical Center, had phoned his parents and said, “You’ve got to come.” Without hesitation, they came.

“I was in awe,” Liljeberg said. “I don’t have the eloquent words needed to express what I was feeling. Singing from the soul is what it was. It brought tears to my eyes. I’ve never heard anything that moved me like this. Not even in New Orleans.”

Liljeberg said all five of the featured sopranos were excellent, as were the pianists and saxophonist.

“What they have, you cannot teach,” she said. “They have gifts from God. I’ve never heard anything as wonderful.”

“An Afternoon of African American Spirituals” was a celebration of Black History Month and featured sopranos,  Shelia Jackson and LaShea Money of Troy, Anna Moore and Tommy Cargill-Easterly of Montgomery and Ashley Knight of Prattville and  pianists Henry Terry and Milton Williams of Montgomery and saxophonist Patrick Jackson of Troy.

Vicki Pritchett, JCA executive director, said the Sunday afternoon concert was all she had hoped it would be and more.

“How many superlatives can you find to describe that incredible concert,” Pritchett said. “I’m not sure that New York City could boast of anything as good. The vocalists had different styles and all got standing ovations and they should have. It was hard to imagine that the next soprano could be as good as the last but they were all outstanding. And the instrumentalists were just as talented. It was a wonderful concert. No one could have gone home disappointed.”

All tickets for the concert were sold and Pritchett said she was excited and thrilled at the turnout.

“Our community came together to celebrate the artists and the importance of African American spirituals to all of us,” she said. “These spirituals are to be appreciated and celebrated and that was done in marvelous way on Sunday.”

Tonya Terry, WSFA news anchor and true Trojan, said “An Afternoon of African American Spirituals” was a great concert for a great cause.

“So much talent,” Terry said. “As much talent as is at Carnegie Hall. We need more entertainment events like that and more often.”

Brundidge Mayor Isabell Boyd agreed more and more often and throughout the county.

Loria Britt of Enterprise turned around.

“Why, I thought I had just been to a concert at a theater in New York City,” she said with a smile.

Pritchett said that was, perhaps, the collective thought of all who attended.

She expressed appreciation to the featured entertainers and to all who came to enjoy a Sunday afternoon concert at the Johnson Center.

“I can’t say thank you enough,” Pritchett said. “And a very special thank you to Shelia Jackson who put all of this together. We are already thinking about next year and what we can do. But it will be hard,  if not impossible, to top this.”