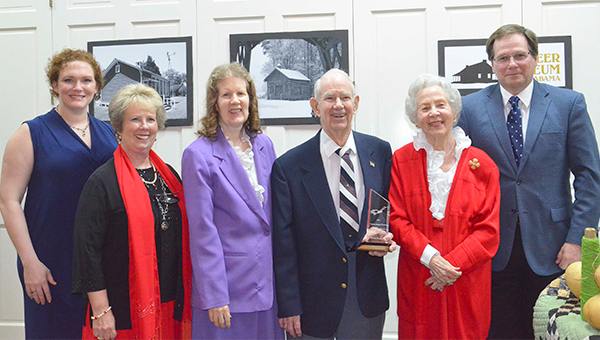 The Pioneer Museum of Alabama honored Donal Dunbar, one of its own, with the 2017 Curren Adams Farmer Outstanding Pioneer Achievement Award Saturday night at the museum’s annual award dinner program. The award was presented to Dunbar by Jeff Kervin, board of directors chairman. Pictured, with Dunbar and his wife, Sarah Lee, are from left, Kari Barley, museum director, and daughters, Dorothy Rogers and Dianna Lee Dunbar, and Kervin.

The prestigious award was presented to Dunbar by museum board chairman Jeff Kervin who said leadership is critical for the continuing growth of the museum.

“And Donal Dunbar has provided that leadership for many years,” Kervin said. “We greatly appreciate what he has meant and continues to mean to the Pioneer Museum of Alabama.”

Dunbar graciously and humbly accepted the award and, laughingly, said that he was told he wouldn’t have to say anything. However, he did have a few things to say about the formative days of, what was then, the Pike Pioneer Museum.

The idea for a pioneer museum originated with the namesake of the Outstanding Pioneer Achievement Award, the late Curren Farmer.

Farmer enlisted Dunbar’s support and assistance and Dunbar was agreeable.

“Ed Whaley and I started going around collecting money to help get the museum started,” said Dunbar who was a member of the museum’s original board of directors and also its first secretary. “We worked hard to get up the funds that were needed. We hoped the museum would be a success and it has been but no one knows what will happen. I’m very honored to receive this award.”

Dunbar is a native of Troy and a devoted and contributing member of his hometown. His business affiliations throughout the years allowed him to use his leadership and management skills with Alpha Lumber Company in Montgomery, the family’s Troy Veneer and Crate Company, Dunbar Mining Company and Alabama Warehouse Corporation, which later became Anderson Peanut Company.

Dunbar has been active in the  Troy community serving on the board of directors of Troy Bank & Trust Company, Troy Chamber of Commerce and the Pioneer Museum of Alabama. He has held membership and also leadership roles in the Troy Rotary Club, the American Legion, Troy University’s Action and President’s  Club and the City of Troy Planning Committee.

Dunbar is a member of First Baptist Church where he has been its chairman and deacon.

Kari Barley, museum director, said Dunbar has been a longtime valued member of the Troy community and a mainstay of support for the Pioneer Museum of Alabama.

“He has generously given of his time, talents and resources to help maintain our museum of pioneer history and to keep alive Mr. Farmer’s dream of a place where people can come to learn from the past. We are honored to honor him.”

Emcee for the awards banquet, Ralph Black encouraged those in attendance to support the Pioneer Museum of Alabama through membership, volunteerism, and financial contributions so the history will remain alive for generations to come.