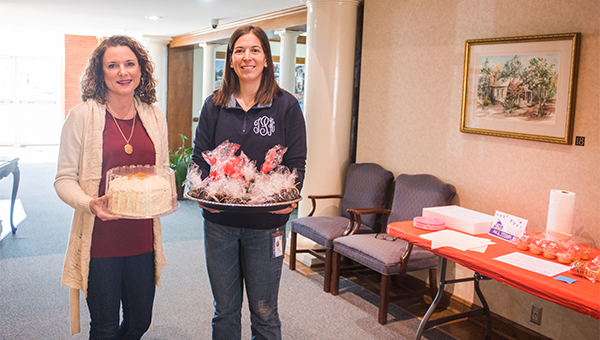 Messenger Photo/Jonah Enfinger
The City of Troy Relay for Life team held a bake sale on Friday to raise money for the American Cancer Society. Pictured at the top are Leigh Anne Windham and Tessa Paul, who oversaw the event.

The City of Troy sold cakes, cookies and other sweets on Friday at City Hall to help raise funds for the Pike County Relay for Life team.

Leigh Anne Windham, co-chair of the Relay for Life team, said that fundraiser kicks off the fundraising season for Pike County as several relay teams have begun planning fundraising efforts for the upcoming months.

“We’re starting to get busy and starting to see a lot of fundraising in the community,” Windham said.

Tessa Paul, who coordinated the bake sale, said they had already sold out of cakes by lunchtime on Friday.

“This was just a quick fundraiser that we got together because everybody likes sweets,” Paul said. “We’re working on a couple of other fundraisers to hold over the next few months.”

The “Men in Pink” team was the first to raise money for this relay, as 20 men in the community committed to wear pink all November to raise awareness of breast cancer and money for the relay team.

The team started the annual fundraising campaign off well, bringing in over $27,000. The Pike County Relay for Life team has set a goal of $145,000 total for the year after bringing in $135,000 last year.

The other individual teams in Pike County are now getting active as well to start bringing in the money before the county’s May 5 Relay event night.

All proceeds go to the American Cancer Society to fund research.