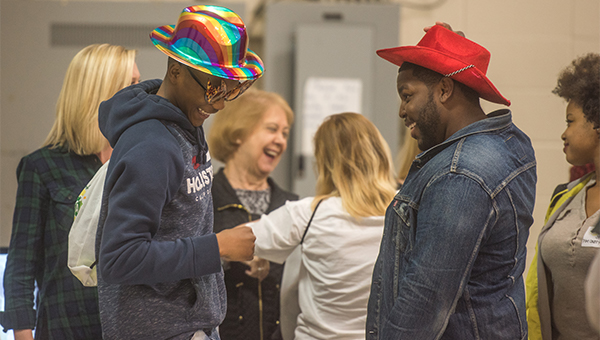 Students attending Thursday night’s “Grad Night” party hosted by Troy Bank and Trust had a lot of different ways to enjoy the night. One thing students could do was take photos at the photo booth, which had colorful hats set up for students to use (above) and had hair and makeup stylists waiting to spruce up attendees for their photos. Inflatable sports games were also set up and students had pizza, wings, sandwiches and more available for free.

Seniors from across the Wiregrass Region of Alabama came to the Pike Cattleman’s complex on Thursday for Troy Bank and Trust’s third annual “Grad Night.”

Dianna Lee, director of marketing for Troy Bank and Trust, said that the bank started the event when they realized they had events for kids and senior citizens but nothing for young adults.

“This gives us a chance to show that we have a fun side,” Lee said. It gives us the chance to introduce ourselves and they have the chance to talk to our bankers and our e-banking department.”

Lee said that this is the time in students’ lives when many of them choose who they want to bank with for the first time.

Lee said that the bank reaches out to all the schools in their footprint for the event, including schools from Coffee, Dale and Houston counties in addition to Pike County.

Hundreds of students showed up for the big party on Thursday night for free food, games and door prizes.

Some big door prizes were given away, including an iPad and a Yeti cooler, but Lee said winning those door prizes wasn’t as simple as showing up and entering a raffle.

“In order to win those they had to go around the tables that were on a punch card and get those punched,” Lee said. “They had to do just a litle work tonight.”

Tables that the students had to visit included tables with informaiton of voter registration, drinking and driving, and immunizations needed for college.

Henry Everett was the DJ for the event and students could also meet and greet with Miss Alabama USA Baylee Smith.

Inflatable sports games were also set up for students to participate in, as well as a photo booth complete with accessories and hair and makeup stylists.