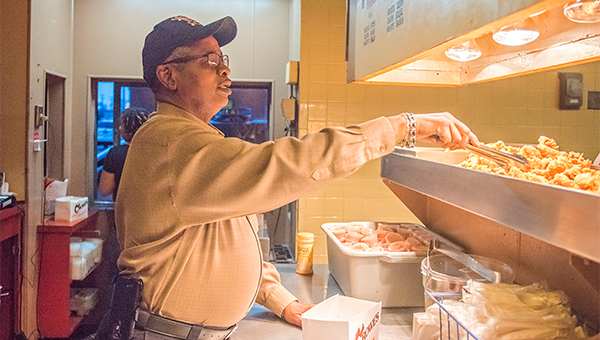 Robert Jones has always worked to be successful in whatever he does, whether that’s owning and operating his Crowe’s Chicken restaurant or serving on the Troy City Council as the representive for District 1. Jones started as the assistant manager of Crowe’s in 1981 and has owned the business for the last 21 years. He was elected to the Troy City Council in August 2016. Above, Jones fills an order at the Crowe’s on U.S. Highway 231 in Troy.

Long before he was elected to the Troy City Council, Robert Jones was a successful businessman in Troy.

Sherroll Crowe opened Crowe’s Chicken restaurant on Highway 231 in Troy in 1976. In 1981, Jones came on board as the assistant manager. Before long he was promoted to manager.

“I worked as manager for 17 years and, if I do say so myself, we were very successful,” Jones said. “Every year, our business increased.”

Crowe owned three Crowe’s Chicken restaurants, on Highway 231 and North Three Notch in Troy and a location in Brundidge. He decided to get out of the restaurant business and gave Jones and the manager in Brundidge first options to buy the businesses.

“I thought about it and decided, what better than to work for yourself, and I’ve been working for myself for 21 years now,” Jones said. “We’ve been very fortunate.  Crowe’s Chicken on 231 has received a lot of awards. One magazine named us the best chicken restaurant in the nation and, in another poll, we came in second to a place in Birmingham. People in Troy and Pike County have been good to us and Troy University students have really supported Crowe’s and I appreciate them all.”

Jones said the key to a successful business is providing a great product.

“Give customers something you appreciate first and something they appreciate when they get it,” Jones said. “Next, provide excellent customer service. If you do those two things, you’ll have a good chance for success.”

Jones admitted that when a new chicken restaurant comes to town, that’s cause for concern.

“You know for the new business to be successful, they have to get customers from somewhere,” he said. “You have to continue to do put out a good product and provide good customer service so their customers won’t be your customers.”

Jones said he has taken what he learned in the business world and applied it to city government.

“Politics, politics. Sometimes, I wonder what I have gotten into,” Jones said, laughing.

Then on a serious note, Jones said he threw his hat into the political arena because he has a passion for helping people.

“When Charlie ‘Sarge’ Dunn said he was not going to seek re-election as the councilman from District One, I saw that as an opportunity for me to be more involved in the community,” Jones said. “I’ve always enjoyed helping people, especially young people and our seniors. I thought what better way to give back to my community than to serve on the city council.”

Jones said by serving on the Troy City Council, he has the opportunity to be of service to the people of his district and all of Troy.”

“I was fortunate to be elected and I am thankful for the opportunity to serve,” he said. “My intentions are to try to build on the success that we already enjoy and to continue moving the city forward.”

As a businessman, Jones is fulfilling his commitment to help the city continue to move forward. He is in the process of bringing back the Crowe’s Chicken menu to his restaurant on North Three Notch Street.

“People have been asking me when I was going to bring back the chicken and that’s what I’m working on,” Jones said. “The seniors, especially, were disappointed that we didn’t have Crowe’s chicken and I wanted to bring it back for them, as well as everybody else that likes Crowe’s fried chicken. And, hopefully, it will bring a little more business to that part of town.”