Looking back: The blackbirds that wouldn’t go away 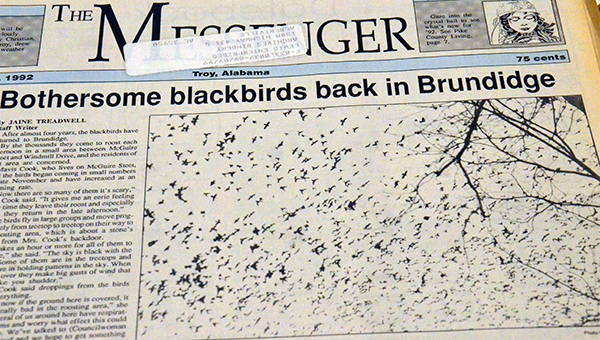 On this day 25 years ago, a swarm of blackbirds caused problems for Brundidge residents, as pictured on the front page of The Messenger that day.

Each spring, the swallows come back to Capistrano and the buzzards return to Hinckley, Ohio. The return of the birds is rite of spring in California and Ohio and the birds are welcomed with open arms.

Not so, when the blackbirds returned to Brundidge 25 years ago.

Residents in the McGuire Street and Windmill Drive areas were the first to witness the return of the blackbirds in early November. The birds came first in small numbers but, by January and February 1992, the blackbirds were back in alarming numbers, giving residents an eerie feeling as they watched the sky turn black as the birds came to roost each afternoon.

“I was thinking, ‘Oh, no! ‘Here we go again,’” said Jimmy Ramage, who was the city’s mayor at that time. Ramage had been a member of the city commission when thousands of blackbirds first came to roost in several locations around the city.

“That was around 1982,” Ramage said. “For about four years, we had to contend with blackbirds and they came by the thousands. They roosted in what was then West Troy Street, in the area that was called Reynolds woods and on up behind Hinwal Circle and off Galloway Road.”

Ramage said there was no explanation as to why the blackbirds picked Brundidge as their winter vacation spot.

“They are migratory birds and I guess they got lost somewhere along the way,” he said, laughing.  “I don’t know where the birds went during the day but they came back to Brundidge to roost every night.”

The blackbirds returned at twilight and, in such large numbers that the sky turned black as they circled their roosting place in holding patterns until they could all “settle down for the night.”

Ramage said the noise was almost deafening and could be heard seemingly all over town.

“It was real noisy with the bird chatter and the flapping of wings and the smell was … you can imagine,” he said. “It took them too long to settle down.”

Ramage said not only were the birds a noisy nuisance, they were also a health hazard.

A rare flu-like disease, histoplasmosis, can be caused by a fungus that thrives in soil mixed with bird droppings.

Brundidge city officials consulted with county and state health officials and the U.S. Fish and Wildlife Service for solutions to the blackbird problem.

“The first recommendation was to run them away with loud music,” Ramage said. “We played loud, loud music but I guess the birds liked Led Zeppelin. We tried pyrotechnics. We tried every kind of loud noise  — guns, cannons, explosives and nothing moved them off the roost. We tried everything.”

All the trying cost the city about $30,000 and nothing was working.

Then, in 1992, the blackbirds were back and nobody welcomed them with open arms.

“But, not that many came that year, a least not like in the other years and they didn’t stay very long,” Ramage said.

Every now and then, on a sunny winter’s day, residents will look skyward and see a cluster of blackbirds. Those who were around in the 1980s, will say as Ramage did, “Oh, no. Here we go again.” Others will see the coming of the blackbirds as a rite of spring and welcome them with open arms.