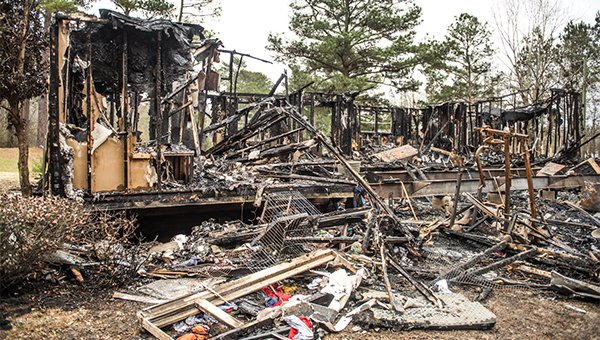 Misty and Toby Wambles lost their family home to a devastating fire on Saturday afternoon. The couple and their sons, Gage and Hunter, are overwhelmed by the loss but also feel blessed, Misty said. “We lost so much but we have our faith and that’s what counts.”

Misty Wambles stood and watched as flames engulfed her home. She watched as everything her family owned was lost.

Through it all, she praised God.

“God was watching over us,” Misty said. “Toby and Gage were able to get out with the fire coming right at them. We praise God that they got out, that they were saved.”

Around 4 p.m. Saturday, there was an explosion at the Wambles’ home in the Shiloh community. Within seconds, fire raged through the mobile home.

Toby Wambles and 9-year-old Gage were watching “Sponge Bob” on television when they heard a loud boom.

“Toby thought the boom came from outside, but he jumped up to see,” Misty said. “When he turned the corner toward the utility room, the heat from the fire hit him in the face. Gage had run after him so Toby shoved him back and pulled him to the floor.”

Misty said by that time smoke was filling the hallway.

As the father and son crawled under the smoke toward the outside door, the glass in the windows shattered.

Toby Wambles was recovering from gallbladder surgery, but once they made their way to the door, he picked up his son and carried him across the yard to a safe distance from the fire.

Misty was about five minutes away from home when she got a call from her husband saying their home was on fire.

“We had been working in the yard that morning and, just before I left to do some baby shower stuff, I was on the back porch,” Misty said. “If I had been home, I would have been on the porch, right where the explosion happened. Our son, Hunter, was off hunting. We were so thankful that he was not there.”

The family lost all of its material possessions, including Toby’s work truck.

“Toby’s face was burned from the heat and his hair was burned down to the scalp,” Misty said. “He squinted his eyes so tight that his eyelashes and eyebrows were burned and he’s had some trouble with the vision in his left eye.

“But God was watching over Toby and Gage. They were able to get out with the fire coming right at them. We praise God that they got out – that they were saved. We were all blessed.”

There were tears, of course – tears at the loss of personal things that cannot be replaced – photographs, items that had belonged to grandparents, jewelry, baby clothes and locks of their babies’ hair. “The loss of those personal things hurt but everything else was just stuff,” Misty said. “We lost so much but we have our faith and that’s what counts. Our faith remains strong.”

Toby and Misty are the youth directors at Shiloh Baptist Church. Their ministry includes the children’s ministry and Vacation Bible School. Misty is also the music director.

The church immediately took a love offering for the Wambles family so they could purchase items of immediate need. The Rev. J.C. Turner, church pastor, offered the use of a house he owns near Banks.

“Right now, we’re just overwhelmed,” Misty said. “We have decisions to make about so many things. We don’t know where we go from here. But God has a plan for us. We know that. We’ll be okay.”

Those who would like to assist the Wambles family in their recovery efforts may call Rev. J.C. Turner at 334-268-6511 for information.